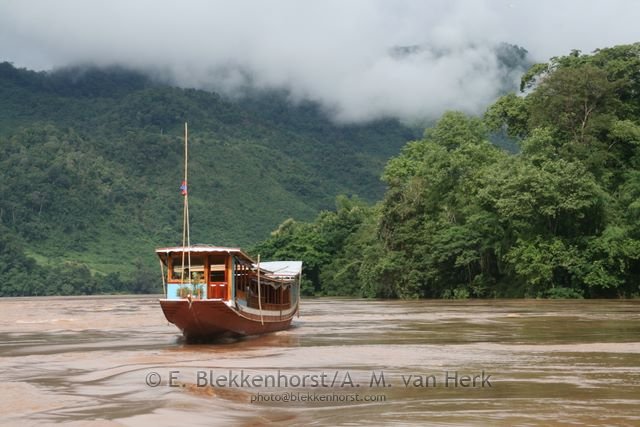 The above is not communist propaganda, it’s a line in the little travelguide we received with our Mekong river cruise from Huay Xai to Luang Prabang in Laos. Traveling in South East Asia does make you rethink your opinion of American foreign policy: the things they did to fight communism are horrible, especially when you realise that within 30 years, communism has proven itself to be unsuccessful and unsustainable all by itself.

After spending two fairly unexciting days in Chiang Rai in a nice hotel, the Mantrini, we were taken to the Thai-Lao border at Chiang Khong. It’s one of the most inefficient border crossings I have ever done, but I have to admit it was more fun than the normal airport entry. An over land crossing like this makes you much more aware of the fact that you are entering a new country.

The formalities taken care of, we were taken to our cruise boat which took us to Luang Prabang in the course of two days (and one night spent in a lodge on the river banks). The 300 km trip was amazingly beautiful, and Luang Prabang seems to be a fitting destination – it is a Unesco World Heritage site and super cute. We will stay here for 3 days before flying to the capital, Vientiane.