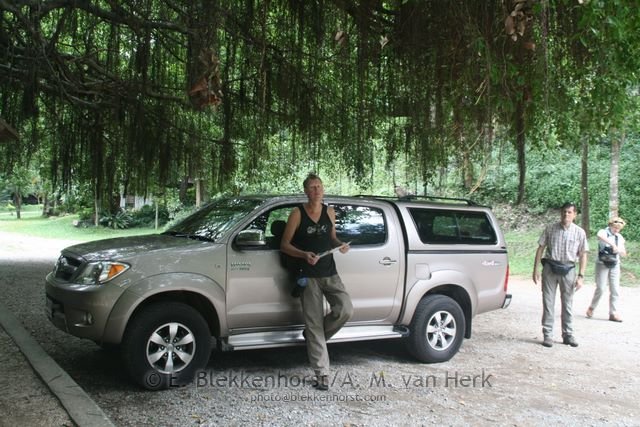 It’s been more than a week since our last posting.. Ouch.. Let’s just say that we’ve been too busy this week.

Seeing my mom and Wil again in our in hotel in Bangkok, after more than six months, was a little emotional but really great. There was so much to talk about and we had plenty of time during the week to do so. We traveled from Bangkok to Chiang Mai together in a rented car, visiting the North West part of Thailand. Time passed very quickly as we had a lot of fun together and went to see and do so many great things. Traffic in South East Asia is usually awful but in Thailand it seems reasonably civilized. Driving here is still adventurous but you get used to it quickly. Size matters so driving a large Toyota 4WD truck did help us getting around safely.

We were in Bangkok a couple of years ago so spending one and a half day there now was enough for us to see some of the highlights again. The next day we picked up our wheels and left the city to go North, to Ayutthaya. “Driving my car, my hands wet on the wheel… Radar Love.”. We lasted less than 30 minutes before we were pulled over by the police. The officer claimed (we think) I was speeding. The only thing we could understand was “International” and “Police station”. Not to panic as it wasn’t a problem some money couldn’t solve… 😉

Ayutthaya is another place we were before but still nice to see the amazing historic temple ruins again. From there we took the road into the mountains and towards the Myanmar (Birma) border. We were amazed by the overall condition of the roads; pretty good actually (considering you are in the middle of South East Asian nowhere) but they could have cut back on the number of corners (there’s thousands of them..). Some parts are so quiet it’s as if you have the road all to yourself. It was fun to drive and the views along the way are stunning. The terraced rice paddies sometimes remind you of Bali except for the occasional elephant that may cross your path. Elephants are cute so we had to ride them when we were in Mae Hong Son. It was interesting to see the river that is the border with Myanmar/Burma. Because the Thai economy is growing and Burma is so poor, many Burmese illegally cross the river on inflated tractor tires to do business in Thailand.

After visiting many many temples (Wat), temple ruins, chedis (not Jedis!), a waterfall and a cave, we reached Chiang Mai, the main city in the North. Today we said goodbye (snif) to Thea and Wil as they’ll be traveling back to Bangkok by car and we’ll be going to Chiang Rai tomorrow and to Laos from there.