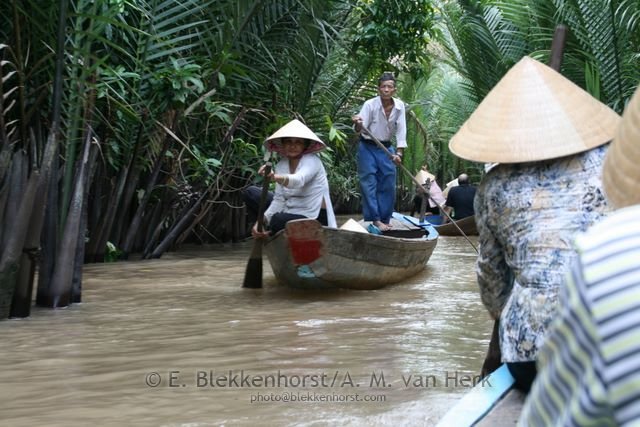 Most people’s view of Vietnam, including mine, is mostly shaped by the numerous movies about the American War. Most of them were made by Americans so they all are biased in one way or another. But, being here it becomes clear very quickly that the Vietnamese have their own view of things. Well, at least the North Vietnamese (who won the war) and thus the government has; Americans are ‘imperialists’ and they were the ones committing war crimes. Never the North Vietnamese..

Vietnam today is still a single-party (i.e. communist) state and that, considering its ties with China and Cambodia, is not going to change anytime soon. But, like China, they released the brakes on economy and allowed people to make money. And that shows when you walk around Ho Chi Minh City (HCMC), or Saigon as most South Vietnamese keep calling it. The vibrant city is the commercial capital and is very much like any other fast growing South-East Asian city. And growing it is.. The greater Saigon area is already home to some 11 million people. There are more than 4 million motorbikes in the streets with 1000 new ones joining every day. That makes crossing a street a real adventure! And if not run over by a bike it’s actually not unlikely to be hit by a shiny new Rolls Royce …

We stayed in Saigon for 4 days. We visited the city and made a couple of (very touristy) day-tours. The Reunification Palace where North Vietnamese tanks came crashing through the gates on April 30th 1975 which marked the ending of the American War was not very exciting. The War Remnants Museum is not very good either and requires a strong stomach as many of the pictures on display are horrible. Our Mekong River Delta cruise was much better; we were taken by boat to some of the islands in the Mekong Delta to get an idea of the scenery and life in the country’s ‘rice basket’ (and yes I did try the snake wine).

Another interesting experience was our visit to the Cao Dai Great Temple. Cao Dai is a religion that is basically a mixture of Buddhism, Confucianism, Taoism, Christianity and Islam with a touch of Vietnamese spiritualism and a dash of secular enlightenment. We found out from a painting that Victor Hugo apparently is one of the Westerners being revered by Cao Dai. The temple is as colourful as its religion and we were lucky to arrive when some ceremony was going on. Next stop were the Cu Chi Tunnels, a network of tunnels that was used by the North Vietnamese Army (Viet Cong) to control a rural area only 30 km from Saigon during the war. The area was heavily bombed by American B52 bombers and it is estimated that the amount of shrapnel equals to around 1kg of steel per square meter. You get to crawl into one of the (widened!) tunnels where it’s dark and very narrow and all you want is to get out asap.. The tour ended with a splendid example of North Vietnamese propaganda: a movie about Cu Chi people’s heroism. Our last day in Saigon was a bit unvoluntary as we wanted to leave that day but couldn’t get a flight out. Oh well. That sometimes happens and the best way to deal with that is.. well.. to go shopping!

Our flight the next day took us to Danang on the East coast, roughly half way up between HCMC and the capital Hanoi up in the North. From there we traveled to a small island called Tam Hai which has a small but very cute resort where we’re staying a couple of days for some much needed vacation. Uhmm.. Excuse me? Vacation? Yes.. We had been traveling for weeks if not months and never really took time to relax for a bit and do nothing. It appears we are still very competent at doing nothing as the past couple of days have passed really quickly while doing… well.. nothing.