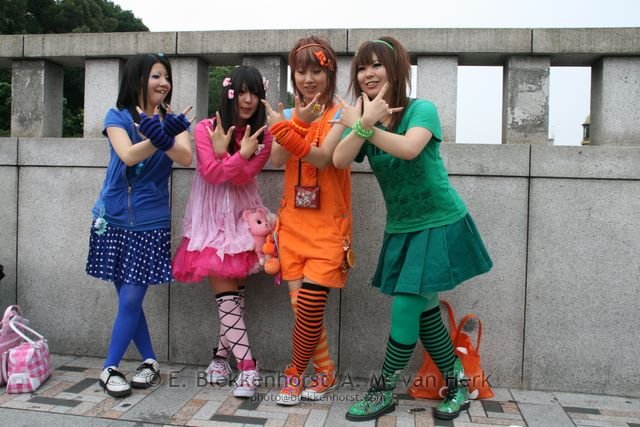 “Harajuku Girls you got the wicked style. I like the way that you are, I am your biggest fan.” sings Gwen Stefani in the song conveniently titled “Harajuku Girls”. It’s about the Cosplay-zoku, or costume play gang, which are teenage girls who assemble each weekend at Harajuku’s Jingu-bashi bridge in Tokyo dressed as goths, kimono punks, Edwardianas or cartoon nurses. The story goes that many of them are bullied in school and find release by dressing up this way. A world famous phenomenon we had to see (and photograph) ourselves. It was fun to watch and it reminded me very much of the punk and new-wave era back in the eighties but with a more contemporary touch; it also made me feel as if I was walking around in Second Life, the (in)famous digital social network and its 3d virtual world. It also shows how important the world of manga (Japanese cartoons) and anime (Japanese animation) is in Japanese society. Where else can teenagers dress up as their favorite cartoon character and men of all ages read their favorite cartoon while riding the metro to work?

We actually spent quite some time in the metro visiting some of Tokyo’s main attractions: the Senso-ji temple complex, the Tokyo fish market, Kabukicho, Roppongi and the Imperial Palace and gardens. But, as the city is nerd heaven, also the electronics and camera super malls. We didn’t want to miss the World Heritage sites in Nikko so we made the 2 hours long train ride to this small town North of Tokyo. The fantastic temples and shrines where all very nice despite the sometimes wet and hot weather. But I have to admit that I’ve reached my temple and shrine limit now. We’ve seen quite a few and they start to look alike…

Tokyo is also home of the most succesful Disney parks in the world. It not only features a Disney Land but also a Disney Sea, which is unique in the world. Miek is a big fan of Disney parks and I sometimes think the whole reason for going to Japan is her being able to go to this park. So we had to go… Monday morning, our last full day in Japan, seemed to be a good time to go there as it was relatively quiet and we never had to wait long for any of the attractions. A theme park is a theme park and this one was no different. But it looked spectacular and it is amazing how much effort is put into even the smallest detail.

Yesterday morning we took the Shinkansen back to Kansai airport near Osaka to fly back to Shanghai and from there on to Hong Kong. The flights were with different airlines which meant we had to recheck our luggage in Shanghai and thus technically had to enter the country. Our visas had already expired so we were a bit nervous when we stepped up to the immigration officer. With a big smile he put a special stamp in our passports and waved us through.. Now that’s what I call good service. Something U.S. immigration officers can only learn from.. 🙂

After a night in one of the big hotels near Hong Kong’s Chek Lap Kok airport we flew to Ho Chi Minh City (or Saigon) this morning. We will spend a couple of weeks in Vietnam before going to Bangkok where we will meet up with my mom.