Peru to Ecuador – Aliens & Another birthday 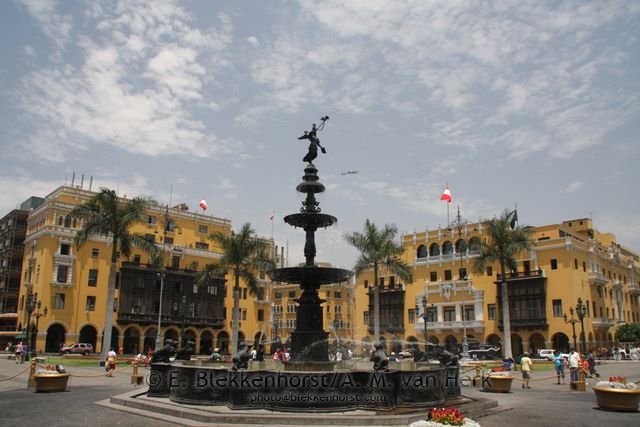 Peru to Ecuador – Aliens & Another birthday

Everybody has heard of the famous and mysterious Nazca lines but nobody seems to know for sure how they were ever created and why. The lines are a series of geoglyphs located in the Nazca Desert, stretched out over an arid area of 500 sq km. They form a network of more than 800 lines, 300 figures and some 70 animal and plant drawings. Among them are a 90 m long monkey, a condor with a 130 m wingspan, a hummingbird, a parrot, and a figure known as the astronaut. It is believed that they were created by the people of the Nasca Culture between 200 BC and 700 AD and have religious meaning. A common theory is that they used sticks at both ends of a line and a long rope between them to guide the people drawing the line (the drawing was actually done by removing the reddish-brown iron oxide coated pebbles which cover the surface of the Nazca desert). Hmmm. Too easy. Like some others, we support the theory that the lines were created with the help of aliens. Why else would they draw a picture of a man-like creature that so obviously looks like an astronaut… 🙂

Arequipa is very much a colonial town. In fact it looks like many other colonial towns in the region. What makes it special is that many colonial buildings were built of sillar, a pearly white volcanic rock, from which the city gets the nickname La Ciudad Blanca (“The White City”). The historic centre is now a UNESCO world heritage site. It’s nice to walk around in for no more than a day. One of the nicest sights is the Santa Catalina convent, which is a small and colorful city within the city. We also had some good food and actually had the best french fries (which means fried for a little more than just 10 seconds and crispy) in the whole of South America at.. a local Turkish restaurant.

From Arequipa we took the bus (around 8 hours) to Nazca (Nasca) where we arrived around midnight. Pretty late but upon arrival we could still decide on the time of our flight over the Nazca Lines the next morning. And that’s what you’re there for. Not much else to do in Nazca. See the lines and get the next bus out.. The flights are in Cessna planes that fit 6 people including the pilot. So small groups and everyone has a window seat. To make sure people on both sides of the plane get to see everything, the pilot circles around like it’s some stunt show. Not for people with weak stomachs. But you do get stunning views and, if your stomach allows, you can take some really good pictures.

So after the flight and a nice lunch it was indeed time to leave town. It only takes around 7 hours by bus to get to Lima.. Sigh.. And the only exciting thing along the way was a sand storm that swept across the road. Oh well. We survived. In Lima we had a hotel booked in Miraflores, a district which is known for its shopping areas, gardens, flower-filled parks and beaches. It is one of the upscale districts that make up the city of Lima. But the hotel wasn’t quite up to par. The people were really nice but it was just too hot and noisy. So the next day we moved to another, a little more expensive, hotel a few blocks away which was a lot better. Just in time as my bowels decided to rebel against me the next day. I barely managed to survive the city tour around Miraflores and to Pachacamac, an Inca archeological site nearby… Lima is a big modern city with a nice colonial center. The one thing that always strikes me when we get to such cities is that the people in general are so much fatter. It must be a sign of prosperity..

Because there is no direct connection from Lima to Cuenca in Ecuador, we flew to Tumbes in the North of Peru and from there took the bus across the border into Ecuador and to Cuenca. That was on the 24th, my birthday, and not the most exciting way to spend that day. It was also the last day of carnaval and for some reason that totally eludes me, the people on this side of the Andes seem to think it’s funny to spray each other (or if they have the chance, total strangers) with water, soaking them to the bone. You might think that sitting in a bus is safe but, as we found out the hard way, it isn’t. They managed to empty complete buckets of water through the open windows of the bus and, as it was moving, managed to soak many of the passengers… (Of course, we closed the windows after the first bucket but the people in front of us didn’t, so we got hit twice). After a change of clothes later in our very nice hotel in Cuenca we had a splendid dinner to finally celebrate the day.. I must say that it feels very strange to have my birthday abroad for the second time during this trip. It makes you realize how long we’ve been away from home. The fun thing is that instead of 2 different countries I had them in 3!