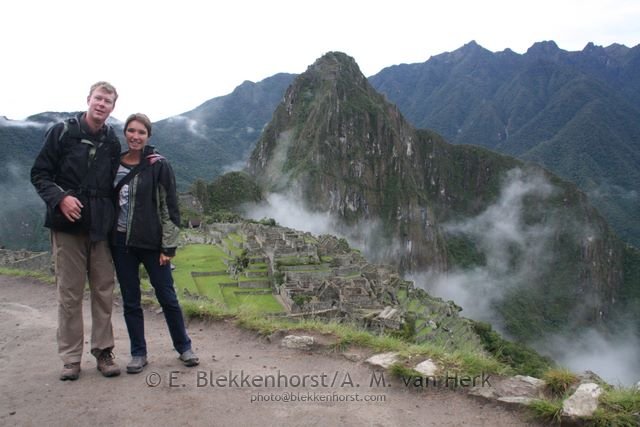 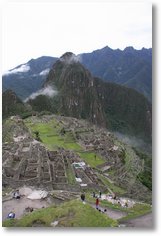 Guinea pigs are surprisingly versatile little critters. Not only do they look good on a little treadmill, according to the Incas they also had diagnostic capabilities. If, for instance, you had a stomach ache, you needed to hold a guinea pig against it while you were asleep. The next morning, a priest would cut open the animal and would then be able to tell what was wrong with you by looking at its intestines. We heard this story from two different guides, so it must be true. But it only works with wild cavias, so don’t start hurting any pets! Something that tame guinea pigs are good for, are as a culinary specialty. In Peru, ‘cuy’ or guinea pigs are still eaten at special occasions.

So when we arrived in Cusco, we wanted to try one. We’d seen some furry cuddly live ones that day on our way from Puno, so we were in the mood. But we didn’t expect to be served the whole animal, including crispy skin and overbite! It was quite difficult to get the meat off of it, but that didn’t matter much as we did not really like the taste anyway. The paining of the Last Supper in Cusco’s beautiful cathedral proves that the Incas already ate guinea pigs: in the middle of the table, there is a big platter featuring one…. by incorporating local elements in their catholic teachings, the Spaniards tried to make the new religion more palatable for the indians.

Cusco was the capital of the Inca kingdom. Although the Spaniards very carefully ended all signs of their culture, many buildings are still standing on Inca foundations. The way the Incas built temples and other important buildings, was amazing: with perfectly polished stones that were placed on top of each other without any kind of mortar. Although the Cusco region suffers from regular earthquakes, the Inca walls are still standing. The combination of Inca remains with colonial architecture makes the old centre of Cusco very cute indeed. The only drawback is that it is extremely touristy. Not surprising, considering that South America’s main attraction, Machu Picchu, is nearby.

Machu Picchu is surrounded by mysteries; there is a lot we don’t know about the city. It is thought that only some 600 people lived there, mostly priests, astronomers, farmers and some guards. Probably, Machu Picchu was only inhabited for some 70 years, while it took more than a century to build! And the city wasn’t even finished when the Spaniards arrived, as can be seen in the quarry in the city that still has some half finished stones in it. It is believed that the Inca’s cleared out and then left the city voluntarily, to prevent it from falling into spanish hands. At least that part worked…

And of course, we had to visit the city as well. It can only be reached by train, and we wanted to get there early to avoid the busiest hours. After some deliberation, we chose to do a tour to the ‘Sacred Valley’ and get off at Ollantaytambo instead of returning to Cusco. That way we would get to see the Inca ruins in Pisaq and Ollantaytambo as well, and we could be in Machu Picchu early: taking the five thirty train. In the morning! The short night was worth it, because when we arrived at the famous Inca city it was not yet covered in mist. And the view of the city once you climb above it is nothing short of spectacular! The city is located on top of a mountain and surrounded by other mountains. It’s not wonder the city was hidden for centuries; it’s not really a spot you would accidentally stumpble upon when going for a walk. Later in the morning the site was covered in mist, but just as we had climbed to the Puerta del Sol, the clouds disappeared for long enough to take a good look and some pictures. Later that afternoon we took a train and taxi back to Cusco, where we had a great meal and an early night. Today marks the start of a new adventure, in Arequipa!