Patagonia, Tierra del Fuego: To The End Of The World (and back again) 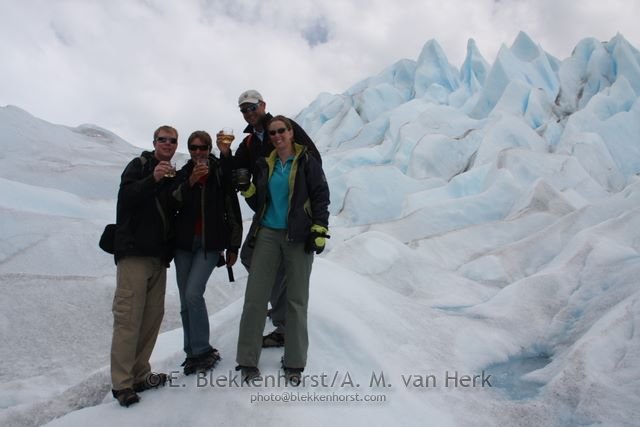 Patagonia, Tierra del Fuego: To The End Of The World (and back again)

“Global warming caused by humans is only accelerating the natural process of global warming in periods between ice ages”. Or so our guide told us at her introductory talk before we climbed up the Perito Moreno Glacier in crampons… Huh? Well yes. It appears that this particular glacier is not affected at all by global warming. It doesn’t shrink in any way and pretty much stays the same over time. Apparently the huge ice field from which this glacier originates is so big and receives so much precipitation (in the form of snowfall) from the Pacific Ocean that it is capable of feeding the glacier at its normal pace (around 16m per year). Good for us as it must be one of the most accessible glaciers in the world. It’s sort of a drive-in glacier; you can drive up and park just around the corner from the edge. When you look up and over the 70m ice wall you don’t realize that the first rocks you can see up at the mountains in the ice mass are rough ly 14 kilometers away. Our mini-trek on the glacier only took us up a few hundred meters but still it was an awesome experience!

Perito Moreno was actually the second glacier we visited in a few days. After driving around the beautiful Aysén region in Chilean Pataonia, with its fantastic colored lakes and impressive waterfalls, we flew to Punta Arenas; a 2 hours flight further south from Balmaceda. From there we drove back up, again in 2 sturdy 4-wheel drives, towards the famous Torres del Paine National Park. It was a bit colder there. But not quite cold enough to keep us from visiting the colony of Maghellan Penguins at a penguineria along the way. The landscape slowly changed from rough and mountainous to vaste pampa like valleys. The park’s landmarks, the Torres (three 2800m high towers), couldn’t be missed. Especially in the great weather we basically had all week; mostly sunny! One of the attractions in the park is Lago Grey and its glacier. The easiest way to visit it is a 3 hour boat ride that takes you across the lake and very close to the ice wall.

From Torres del Paine we crossed the Argentinian border to drive to El Calafate; the gateway to the Glacier National Park where Porito Moreno is situated. Remco & Janneke came up with the idea to do the glacier mini-trek and to give it to us as a delayed birthday/early christmas present. Wow! What a great experience guys! Thank you both so much for an unforgettable day! After a short hike up to the ice-edge you get a pair of crampons strapped to you shoes that give you the grip to walk on ice. From there you are taken up onto the glacier for a trek of around one and a half hour. It’s a bit scary at first to walk on the cold shiny mass between cracks and crevasses and small rivers and lakes of melting water but a lot of fun in the end. Especially when you arrive at the ice bar where you get to drink a whiskey on the freshly-cut-from-the-glacier rocks! Before leaving we spent quite some time listening to the noises (sometimes loud low frequency explosions) the glacier makes and looking at the huge blocks of ice that fall down from time to time..

Unfortunately it was time to say goodbye to Remco & Janneke who had to fly home from Punta Arenas while we moved on to Ushuaia together with Maarten & Elly. Ushuaia is said to be the southern most city in the world. According to the Argentinians, the big Chilean Naval Base of Puerto Williams, just across the Beagle Channel and therefore even further South, doesn’t count… The town itself isn’t all that exciting but a visit to the Tierra del Fuego National Park with its Tren del Fin del Mundo (Train at the End of the World) and a cruise on the Beagle Channel with its birds, sea lions and penguins are absolutely great. After a few days it was time to go back to the real world: Buenos Aires! Yesterday evening we had a fantastic goodbye dinner with Maarten & Elly. They are flying back home today. It was their second visit to us during our trip and we all agreed that that made the past 11 months go by a lot quicker than anticipated…

Buenos Aires itself is interesting. Unexpectedly, it seems to be the largest garbage dump in the world – the amount of garbage in the streets and on sidewalks is staggering. And there is dog poo everywhere. The streets and sidewalks themselves are in pretty bad shape, too, with lots of large potholes and bits of pavement missing. All of this may in part be due to the freakish weather they’ve had here a week ago, a heat wave with record temperatures, followed by torrential rains that flooded the streets. Or maybe the city always looks like this, we don’t know. Fortunately, there’s enough here to compensate for the minor inconveniences mentioned above. Large avenues with tall, 19th century buildings make BA look a little bit like Paris. And there are different quarters like Recoleta, La Boca and Palermo that are extremely colourful, have lovely outdoor cafes and great shopping, with lots of little boutiques. And the wine is still cheap and the steaks are juicy and tender!