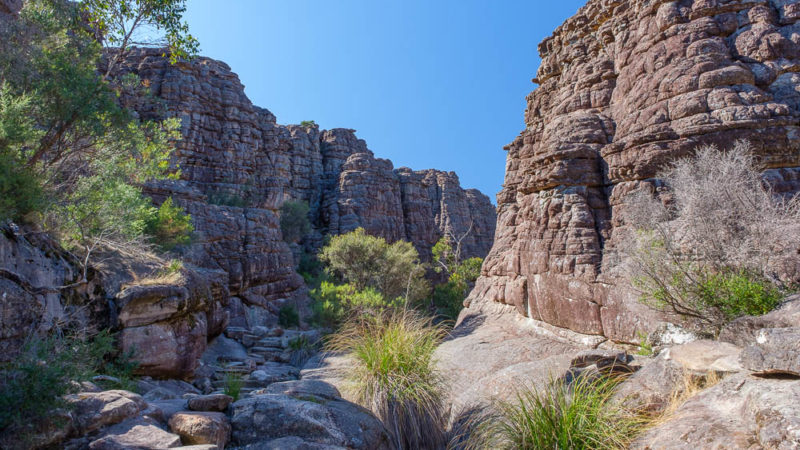 After spending 16 days in a comfortable house in a residential area of ​​Adelaide, it was time to leave. Our final verdict about Adelaide, cast from Melbourne, where we are now: not a bad city, especially because the area around it is fantastic and produces very tasty food and good wines. But Adelaide itself is very much a provincial town: the Australian Eindhoven, so to speak. That is a bit mean, because I can recommend spending a few weeks in Adelaide, especially during the Fringe Festival, and I would not wish a couple of weeks in Eindhoven to anyone. And I am allowed to say that, because I was born there. In Eindhoven, not in Adelaide.

After Adelaide, we had six days left before having to return our trusty Holden Astra, and we decided to spend four of the six days in the mountain area of ​​the Grampians, and two in the gold prospecting town of Ballarat. This decision was based on our thorough online and brochures-of-the-tourist-information-center research, and it turned out to be a good one. 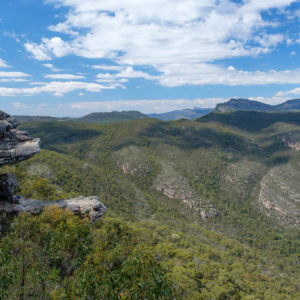 The Balconies lookout in the Grampians

The Grampians were different from what I expected, because I expected them to be mountains. With a maximum height of 1167 meters, they are more like hills, but made of stone: they’re tall rocks. When you drive up from Adelaide the first thing you see is a kind of bump in the otherwise completely flat landscape, and it seems quite small and insignificant. But up close you are talking about an area of ​​about 1650 square kilometers, and the rocks are very erraticly shaped and very beautiful. However, before you get that far, a big surprise awaits you: a giant koala along the side of the road!

The thing is 14 meters high, belongs to a roadside cafe, and it is creepy rather than cute. But I warmly applaud this kind of entrepreneurship, and wonder if I shouldn’t put down a giant tulip or clog somewhere in the Netherlands. The selfie potential would be enormous, it should be very profitable! Unfortunately I think it’s impossible to get a permit for something like that in the Netherlands…

Anyway, the Grampians. We stayed in a cabin in a small holiday park in Halls Gap, a village between two mountain/rock ridges. We were told that there would be a lot of kangaroos in the area, and during our first evening walk to the village this turned out to be correct, as we almost tripped over them. Our house was in the middle of the park so I thought the kangaroos would stay away from there, but fortunately, I was wrong: when we came home from a walk the next day there were a few napping in our garden, and later on there were a few little ones who nibbled on the grass. Baby kangaroos are quite cute, it turns out, but not as cute as baby koalas because nothing in the world is as cute as a baby koala. 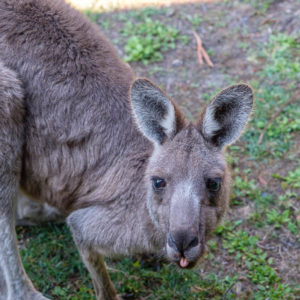 Kangaroo sticks its tongue out at you in Halls Gap

We went for some great walks during our time in the Grampians. The weather was nice and sunny with a cool breeze (read: icy wind, at least sometimes), which made it ideal weather to climb the rocks. Usually these days, we are constantly looking up to spot koalas, but since none of the information boards we encountered on the road mentioned them, we decided that they probably weren’t here and we dropped that. Probably a wise decision, because you really want to pay attention to where you put your feet, as the paths are very uneven and rocky. Of course, afterwards  I realized: those “koalas on display” at the giant koala, they had to have come from somewhere… so maybe we have missed a lot of koalas now. That would be a shame, but our ankles are still intact and that’s also worth something.

After a final walk in the Grampians, during which we went looking for a special rock wall that appears in pictures in tourist brochures and on walls, we drove to Ballarat. Without having seen the special rock wall, by the way. I dropped out halfway because I found the trail too scary, and Erwin climbed to the top but couldn’t find anything like the pictures, so we were misled. We like to think that the rock formation we were looking for has collapsed, but it’s possible we didn’t look in the right place… oh well, we spent some quality time outside, and then we drove to Ballarat via Ararat. 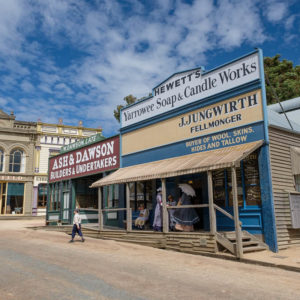 Ballarat is one of the places where gold was discovered in 1851, which led to a huge influx of people and a rapid growth of the city. Even today you can still see a number of buildings from that time, but the best attraction is the open-air museum there, Sovereign Hill. They recreated Ballarat’s prospector camp and Main Street from the early years of the gold rush, and not only that, there are also many actors walking around in historical costumes to make the whole scene look authentic. The next day, when we were at the adjacent gold museum, we saw that Main Street had been recreated quite truthfully, as they had hung drawings from that time next to photos of Sovereign Hill, and they looked the same.

Two things made Sovereign Hill more than just kitsch: in some buildings they had working versions of the machines used at the time to extract and purify gold. For example, a huge steam engine, which in turn powered a system of hammers that pulverized the gold-bearing quartz so that the gold could be filtered out. Fantastic to see! We also saw a demonstration of how the gold dust was then smelted to pour a block of pure gold. Cool!

The other unique selling point of Sovereign Hill, which I thought was completely brilliant, was the fact that they let in school classes to visit the museum. Yeah, duh, that happens everywhere. But here they put the schoolchildren in nineteenth-century outfits, so all of a sudden you’re looking at an entire village with children and adults who all look like a century and a half ago. Really funny, well worth a visit. How to make pure gold

We drove to Melbourne yesterday via two other gold prospector towns, Clunes and Creswick. Yay, we’re in a real city again! We selected a vegetarian restaurant on the internet and went there by tram. Not only did ‘Transformer’ turn out to be a great restaurant, it’s also located in a very nice, hip neighborhood: Fitzroy. Okay, we don’t have any kangaroos in the garden here, or even a garden, but the skyscraper views are nice too. In any case, I quickly remembered why we said it would be nice to spend a few more days in Melbourne when we were here in January.

We will be here until Tuesday and then we fly to Cairns, where we will spend another six days in an apartment via Home Exchange. But after that… we have no idea yet! At the beginning of our trip, we followed the news about the bush fires in Australia every day, and now we are right on top of the Corona virus news. After all, our original plan was to go to Japan next week and stay there until early May.

At the moment, that is still an option, although many attractions are closed, and most patients are in the north of Japan, Hokkaido, exactly where we want to go this time. So we’re wondering: is it a convenient time to travel there? What if they close all the restaurants? Or if we have to quarantine in a tiny Japanese hotel room? I’d rather not. Moreover, there are new countries every day that are closing their borders to all foreigners, so it’s still a question whether we will be able to travel to Japan next week.

Another option is staying in Australia longer than we planned, although in that case we will have to extend our visa because it expires in two weeks. Hopping back and forth to Fiji for a week to be able to stay in Australia for three months again after that is no longer an option since yesterday, because then we will have to self-quarantine for two weeks upon our return. More and more measures are being added in Australia, and toilet paper and hand sanitizer are sold out everywhere. When you look at the empty store shelves, you think that mass panic has broken out, but when you walk on the street or sit on a terrace in Melbourne, you don’t notice a thing, it’s as busy as ever. Weird guys, those Australians…

A third option we have come up with is to fly home via Bali, instead of via Japan. It is nice and quiet there now, there are fantastic villas with swimming pool for rent, perfect to isolate yourself from any virus, and from there we can fly back home relatively easily. We suspect that Indonesia won’t close its borders as quickly as other countries because it is too dependent on tourism revenues… but we will see next week.

In the meantime we sneeze in our elbows when necessary, the skin on our hands is dry from frequent and lengthy hand-washing with soap and we only touch toilet doors and faucets with a piece of paper instead of our bare hands. And today we had a whole gondola of the Melbourne Star Ferris wheel for the two of us alone! As is so often the case, every disadvantage has its advantage…