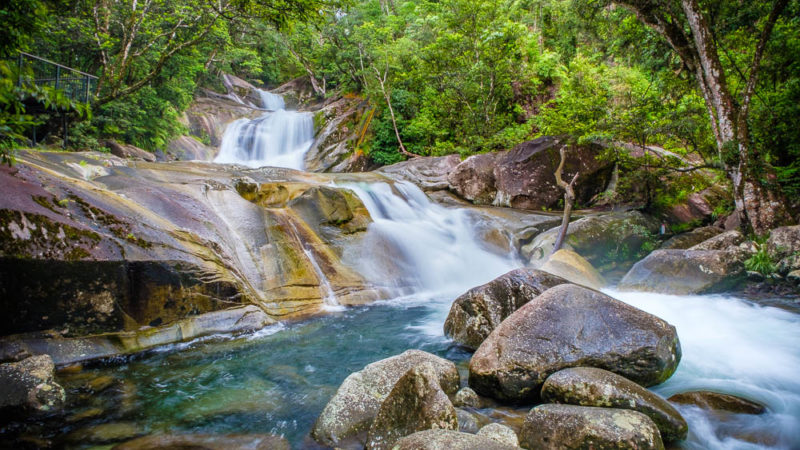 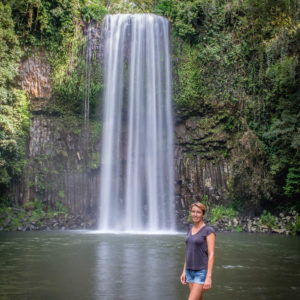 Uber drivers are generally more talkative than taxi drivers. Often the conversation is limited to “Where are you from?”, “Are you here for the first time?”, “How long are you staying here?” and “What will you do next?”. As soon as we have the driver completely up to speed (pun intended), a common response often is: “Gee, you have already seen more of Australia than 99% of Australians!”.

Another topic is the important question: “Which city is nicer, Sydney or Melbourne?”. According to one of the Uber drivers in Melbourne who also lived and worked in Sydney for a long time, that really has to be Melbourne. Because: “Melbourne is the city of students and hipsters. A lot of great things happen here.”. We think that this is a bit more nuanced, but we understand the argument. We secretly think he is right.

The Uber driver who brought us to Melbourne airport turned out to be a super nice 70-year-old man of Israeli descent who Ubers purely as a hobby. He enjoys driving and loves chatting with people from all over the world. That would be us.

The conversation quickly turns beyond the above topics such as: “What about the Corona troubles in your country?”, and “At least Trump is a president who actually makes things happen!”. Right. 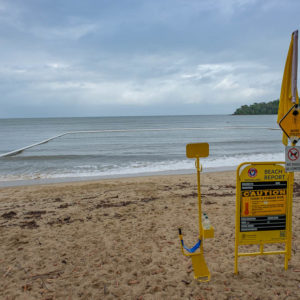 Once we arrive in Cairns, in the far, warm, humid, tropical North of Queensland, we pick up the rental car and find our Home-exchange apartment. It turns out to be a great apartment, but one that is clearly not normally inhabited. Only basic furniture and furnishings are present, so it feels rather uncomfortable. Although there is no Internet available, it is good enough for six days as there is plenty to do in the area. With all the Corona measures that are being taken everywhere, a thought keeps popping up: what if we get stuck here and we need to be quarantined here?

With just over 150 thousand inhabitants, Cairns is the 14th largest city in Australia. So it is small but it does have a nice boardwalk of around a kilometer along the sea. It’s great for taking a stroll, but because the city is located on a muddy lagoon, there is no real beach. The color of the water is mainly brown and very reminiscent of the North Sea. Not very attractive, so if you’d want to go for a swim, it’s not very inviting. Swimming is strongly discouraged anyway, because the area is teeming with ‘salties’. The saltwater crocodiles have a salt tolerance and live in both fresh and salt water. You can basically find them in any body of open water. They grow very large, very old and are very dangerous. Fortunately, you can’t reach the waterfront without tripping over at least six warning signs. And yet sometimes someone gets grabbed. You stand little chance against a four or five meters long saltie. It usually turns out to be a stupid tourists and many people here show little sympathy. If you are able to ignore so many warnings, you had it coming. “The crocs’ favorite flavor is stupid,” we heard someone say.

The coastal strip north of Cairns does have some nice beaches where you can actually swim. The water is still brown, but the beach looks a lot more attractive, especially with the many palm trees. No salties come here so you can safely enter the water. Or no, wait! It is ‘stinger season’, the season in which the jellyfish in the sea are teeming. Fortunately, every beach has its own piece of swimming water, which is trimmed with nets, so that you can go for a good swim. Or a small swim. Well, you can dip your toe. And if you still get stung, there are bottles of vinegar everywhere to soften the sting. So no worries at all! 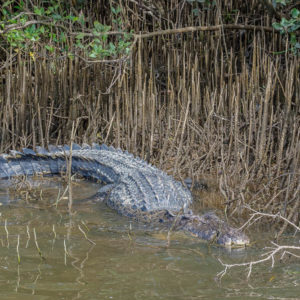 The area around the city also has a lot of tropical rainforest. It is humid (duh!) which means there are many beautiful waterfalls. You can visit most of them and then it turns out that the Aussies have got it covered well; the roads are beautiful, the hiking trails neat and the viewing platforms super. The forest is also teeming with tree kangaroos and cassowaries. The tree kangaroo is a type of kangaroo that, with smaller hind legs and more developed front legs, has adapted to life in trees. The cassowary is literally a strange bird. It’s large (emu size), has a colorful head and it seems to come straight from the dino age. We have tried really hard but unfortunately we have spotted neither animal in the wild.

We have however spotted salties. You can do that on a river cruise on the Daintree River in Daintree National Park. The river is about 100km north of Cairns, the trip there is beautiful and you pass the last town of reasonable size this far north: Port Douglas. A great place to have lunch and go for a walk. The captain of our cruise was a down to earth Aussie (unlike the captain of the other boat because he was a Dutchman) who brought us close to a number of the crocs. The beasts are huge, ugly and also seem to come straight from the dino age. There was one who had apparently just killed another smaller crocodile and tried to tear it up in its mouth. An impressive sight. Towards the end of the cruise, the captain stopped the boat on a sandbar and said, while grabbing a bag from the bottom of the boat: “I want to show you something.” We thought he had a baby crocodile in it, but, very carefully, he pulled out a three meter long python. The good man turned out to be a snake catcher in his spare time. If you live here, there is a good chance that, at some point, you will find a snake, spider or bat in your garden or house. So, who you gonna call? He had just collected this snake in someone’s garden and he planned to put it back somewhere in the forest later that day. Nice work. And also free because it’s done completely voluntary. 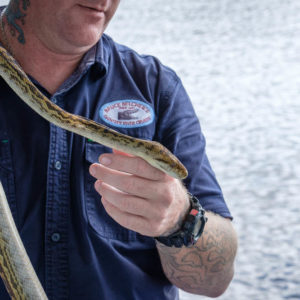 The snake catcher and his python

In between our trips, the Corona crisis developments also kept us busy. We saw the world slowly go into lock-down. More and more countries took increasingly stringent measures and more and more flights to and from Australia were canceled. There was an appeal from governments to come home as soon as possible. We still planned to fly on from Cairns to Japan in a few days to travel around for another seven weeks. It still seemed possible. However, the situation changed day by day and because at some point we were no longer able to say with certainty whether we would be able to get away at all, we made the tough decision to advance the flight to Japan by two days. We thought that once we were in Osaka we could see if we could have our KLM flight from May 5 changed to a departure sometime in the coming days. In the meantime, we could have just spent a few days in Kyoto. Nice!

After we had been waiting in line in front of the check-in counter for our flight to Osaka for a long time, we and all other Europeans were picked out of the queue. With some bad news. The Japanese authorities had suddenly decided to introduce a visa requirement for European passport holders effective that very morning. Nobody knew that and there was no possibility to arrange such a visa on the spot. This means that you simply cannot enter the country. And if you are not allowed to enter the country, the airline will not take you either. Unless you can present a ticket for a flight to your final destination within 72 hours of your arrival in Japan. In that case you can board, but because you are not allowed to go through customs, you have to wait in transit. While standing at the counter we used our cell phones to buy tickets for the KLM flight from Osaka the next day. That meant that we could board the flight after all, but also that we would have to wait 15 hours at the airport in Osaka in transit. There are no beds, so you have to use the seats at the gates to get some sleep. Due to the rush at checking, we had not put a change of clothes or toiletries in our hand luggage. It was a long night, knowing that the flight home would take another 12 hours. 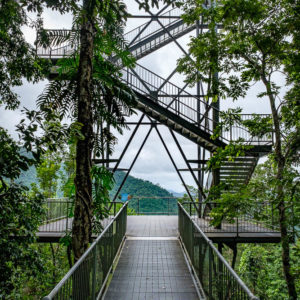 We survived and now we are back home, healthy and well. It takes some time to adjust. And of course it is a disappointment. But there are plenty of horror stories of people all over the world who are really stranded, don’t have a place to stay, and aren’t home yet. We still paid a normal price for our tickets, while others were sometimes forced to fork out ten times the normal fare just to get home as soon as possible.

Everything is relative. We’ll finish the trip some day. Let’s first see how the world fares. For the time being we will wait in self-isolation (because you never know what bugs you may have caught after two intercontinental flights) and look back on three fantastic months of travel. Whatever happens, nobody can take that away from us.