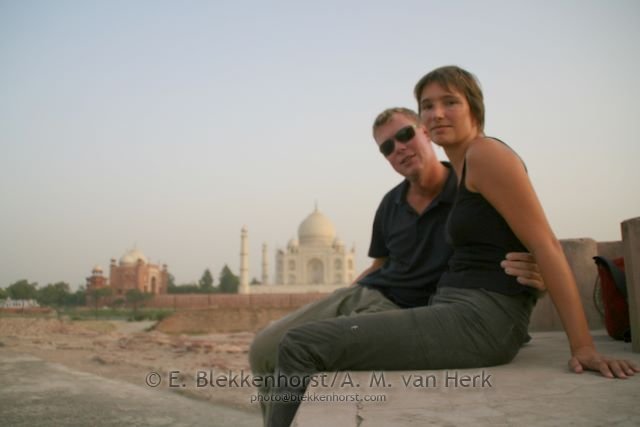 From Ranthambhore, another fairly uncomfortable train ride in an unairconditioned car followed by some 60 kilometers per taxi brought us to Agra. On our way, we stopped to see the palace complex of Fatehpur Sikri and you have to hand it to those old mughals, they certainly knew how to take care of themselves. The hotel in Agra was a nice surprise: a former Hilton hotel with a nicely renovated lobby and bar area, and a relaxing swimming pool… just what we needed.

Early the following morning, we went to see the Taj Mahal. Like anyone, we’ve probably seen hundreds of pictures of this building before, but it certainly does not disappoint when you see it for real! The inlaid marbles are exquisite, and the craftsmenship that went into it is stunning – the whole thing took 20.000 people and 22 years to build and it shows. The idea that someone had the power and the money to build such a monument for a deceased & beloved wive is unbelievable as well – I don’t think there’ll ever be an era again in which people are capable and willing to build something like this.

The train to Delhi only took two hours and we had finally managed to get 1st class AC tickets, so it was a nice ride. Coincidentally, this train was the only one to ride on time as well! Our hotel in Delhi was a lot less fancy but adequate, and it had a nice location, next to the Red Fort. Unfortunately, by this time the Indian food had finally got the better of us, so even with a fresh supply of Immodium we took it fairly slow. For the first time in weeks it was raining a little bit, and we liked it because it made the temperature much more bearable. Apart from the Red Fort we saw the Jantar Mantar (there is one in Jaipur as well but that one was closed when we were there because of the bombings), and the astronomical instruments looked very interesting, although we would not be able to locate a star with them if our life depended on it. We wanted to see the Baha’i House of Worship as well, for its unusual, lotus flower shaped architecture, which made it look a little bit like the Sydney Opera House, we thought. As far as places of worship go, it’s kind of a sympathetic one as it caters to people of all religions, and it was fun to see that it was incredibly crowded when we went there.

So now we’re in Nepal! The time difference with India is ridiculous: 15 minutes! So now we’re 3 hours 45 minutes ahead of home. At first glance, Nepal looks a lot like India, only less crowded. We were very kindly welcomed by the owners of the hotel we’re staying in, the Courtyard Hotel. We’ll probably try to take it slow for a few days while we’re staying in Kathmandu, because we’re still not feeling 100%…