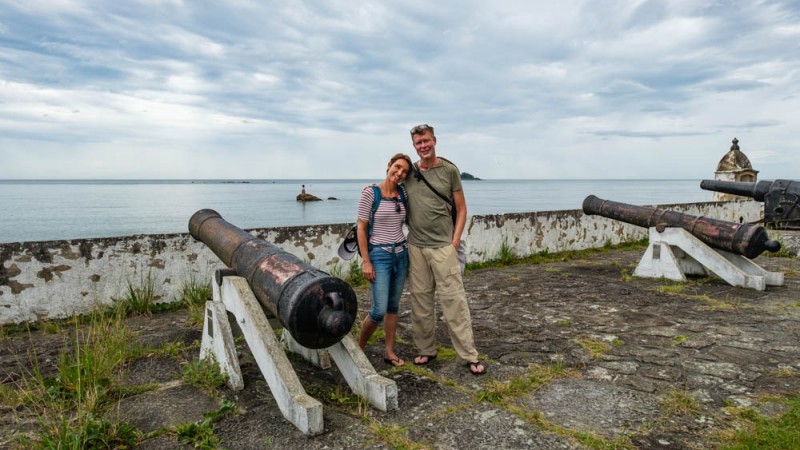 On Ilha de Santa Catarina, the island where Floripa is situated, we learned that it does not matter to the Brazilians whether it is sunny, cloudy or even raining a bit. They go to the beach anyway. And why not? It is always warm and you will have fun anyway. Most of them come much better prepared than we do: whole families arrive with big party tents, chairs, sound systems and cool-boxes full of beer and ice and they won’t leave the beach all day. That’s how you spend your beach holiday! 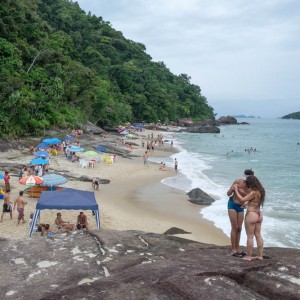 Inspired by this, we decided to spend a couple of days on one of the islands on our way back to Rio despite the not so fantastic weather forecast. You have seen most of the old colonial towns in a couple of hours and if the weather does not cooperate you’re done pretty quickly. On an island you have more opportunities to entertain yourself. We started our drive back north from Floripa and, with a stopover in Paranaguá to visit the historic center, took the ferry to Ilha do Mel.

Ilha do Mel is also a car-free island and looks a bit like Ilha Grande. It is a little smaller, less touristy and therefore a lot more pleasant. It turned out to be a good choice for another reason as well: while dark clouds formed above the mainland, we had some wonderful days with lots of sun. Our pousada offered a brilliant service: if you want to go to the beach, you just take a few chairs and a parasol, put them on a handy trolley that can also serve as a table. The hot sun is less fun if you decide to make a hiking trip across the island. Especially if you take a wrong turn somewhere. But that’s when you have the opportunity to discover a few other beautiful beaches. On the last day we sailed around the island with a boat, visiting the old fort, Fortaleza de Nossa Senhora dos Prazeres, and spotted dolphins (golfinhos).

One of the other areas we wanted to visit before arriving in Rio was Ubatuba. That is known for its beautifully green and dramatic coast, dotted with a series of beautiful beaches. Because the distance from Ilha do Mel was too big to drive in one go, we decided to stay the night in a good hotel near São Paulo. It was Christmas day so we wanted to dine in a decent restaurant. Anyways. Nothing wrong with the hotel but we were the only guests who apparently had nothing better to do on Christmas day than to dine in a hotel restaurant. A restaurant that was also temporarily relocated into a conference room due to a renovation. Very cosy. Fortunately, we already had a proper Christmas dinner on Christmas Eve at Ilha do Mel, so our Christmas was a success already.

Christmas in Brazil also means the beginning of the summer holidays. The Christmas days are spent with family, after which the great exodus to the beaches begins. Ubatuba also gets flooded with people from São Paulo in particular. Because the infrastructure is absolutely not ready for that, everything is jammed up and you are in traffic for a long time.

On the 30th of December we drove the last part back to Rio, returned the car at the airport after having it had for a month and had us Ubered to our AirBnB apartment in Copacabana. Just in time to do some shopping in an extremely crowded supermarket because a lot is closed around new year’s. 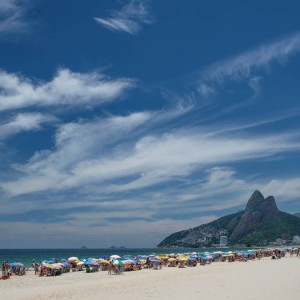 The apartment is two blocks from the beach which makes it the perfect base to celebrate New Year’s Eve on Copacabana beach. Well prepared we threw ourselves into the partying crowds: dressed in white and nothing else packed but the house key, some change and a phone. All well hidden of course, because celebrating on the beach with two million other people has its challenges. And bubbles of course! We learned from our New Year’s Eve experience in Fortaleza, nine years ago, that it was hard to find something decent to drink on the street. In Rio, that appears to be less of a challenge.

We stayed near the main stage for a while to see some of the live show that was organised but the enormous crowds made it a bit less relaxed. We had already found out that there were large video screens with sound installations further down on the beach so that you could also enjoy the show from there. It’s much less crowded and you stand (or sit) between families with children who have probably been there on the beach all day and have just stayed there. Then at some point it turns midnight and the fireworks that make New Year’s Eve in Rio so famous start at sea. It only lasts for 17 minutes but is incredibly spectacular. It looks fantastic on TV, but if you are in the middle of it, it really is out of this world. And that’s when the party really starts. While a number of people go to the water to bring flower offerings to Iemanjá, the goddess of the sea, the rest of the crowd happily started to dance to the pop music of the artist we have dubbed the Brazilian version of Shakira, Anitta. 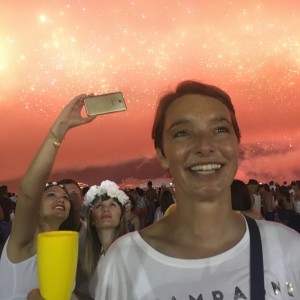 The new year started well with two wonderful beach days. And it’s nice to spend them in Copacabana with the Brazilians. Every travel brochure mentions the skimpy swimsuits and the beautiful ladies’ buttocks. The fact is that the people here, just as in the rest of the world, are generally not very attractive and quite often just overweight. Of course there are also beautiful people. If only because many Brazilians are blessed with a beautiful light brown skin. That means that you can sit on the beach and just look around you endlessly. Maybe that’s also the reason we only saw someone reading a book on the beach twice in the last month…