From Rio to Asuncion 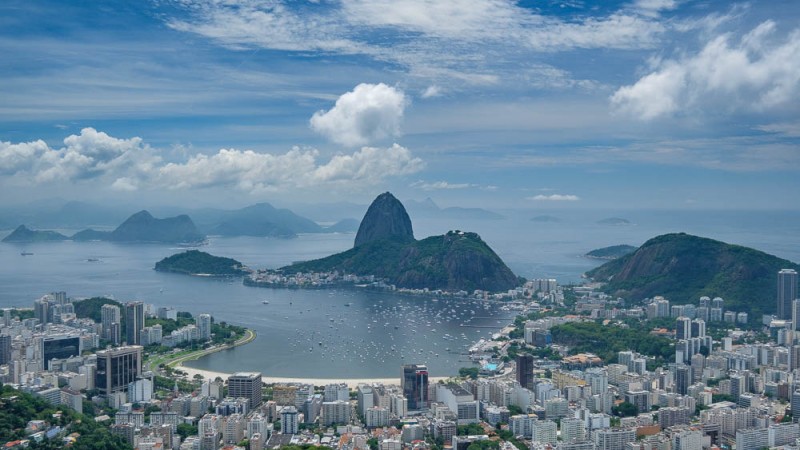 From Rio to Asuncion

Our two weeks in Rio passed quickly. The weather wasn’t always sunny, but it was always warm and it did not rain very often. We learned that it is not a good idea to visit the Christo Redentor on January 2nd at eleven o’clock in the morning (with 6 million others). During a second attempt, a week later and a little earlier in the morning, I learned the hard way that it is also not a good idea to simultaneously put your phone in your bag and try to get the attention of your Uber driver by waving and running in his direction. Fortunately I had only some abrasions, and they are almost healed by now. Erwin tells me I am not allowed to pick at the scabs but it is difficult not to. 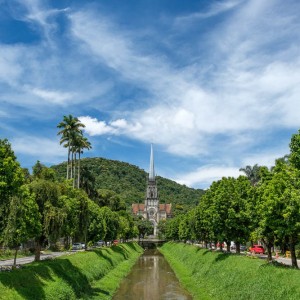 One would think that two weeks are long enough to get to know a city very well, but the longer we were there, the more nice restaurants and lunch spots we discovered that we did not have time to test anymore – and that was only in our ‘own’ neighborhood, Copacabana. During our last evening, when we had a very nice dinner with a colleague in the Santa Teresa neighborhood, we noticed that we should have spent more time there as well. Apparently, during our first visit ten years ago we did not see the whole neighborhood, even though we did take the tourist tram up there.

During our two weeks in Rio we spent a day on a trip to Petropolis. This city is located 70 km outside of Rio, and houses the summer palace of the Brazilian emperor Pedro II. I know it’s a pathetic gap in our knowledge of history, but until recently we did not know that Rio was the capital of Portugal for 13 years, because the royal family was fleeing Napoleon. Petropolis is located beautifully in the hills, and in addition to this palace turned museum you can visit a cute cathedral with tombs of the royal family and the rather monstrous but interesting, slightly German-looking Quitandinha Palace. This is was built as a luxury hotel with casino in the forties, but nowadays it contains private apartments. The residents must be happy with the fact that a couple of coaches full of tourists are dropped at their front yard every day to take selfies. The thing we liked most about the city were the beautiful colonial villas, which were not part of the tour but which we discovered on a walk during the long lunch break.

On January 13, our Brazilian adventure ended (for the time being) and we ubered to the Santos Dumont airport to board the plane to Asuncion. Thanks to our trip to Petropolis, where you can visit his house (when it is open…) we now know that the Brazilians see Santos Dumont as the real godfather of aviation instead of the Wright brothers. His flight lasted much longer, his plane had a real engine and there were also many witnesses to his flight over Paris, including journalists, and not just his sister. 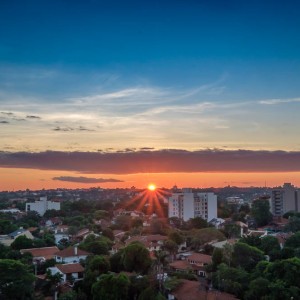 Anyway, Asuncion was, as Monty Python would say, “(and now for) something completely different.” Green. With large shopping malls because apparently there is a tax thing which makes it interesting to shop in Paraguay for residents from neighboring countries. It also has many more coffee shops than Brazilian cities, with better and cheaper coffee. We were particularly pleased with the familiar, Colombian Juan Valdez at the ground floor of our hotel. The hotel looked modern, comfortable and had a rooftop pool, which is always nice. Even though the lack of a swim-up bar clearly is a missed opportunity. So far you would think Asuncion is a nice, modern city. Certainly in our neighborhood it also has very nice buildings, a lot of colonial architecture and all pretty well maintained.

But then you visit the city center. And the beautiful colonial buildings barely stand up and they are covered with graffiti. The central square, the Plaza de Armas, has the obligatory cathedral and the government building along two of its edges, but on the square itself a complete tent camp has been set up by homeless people. The tents consist of a plastic sail that is stretched over a horizontal rope. In the square next to it, they seemed to be busy constructing wooden shacks. Clothes were washed on the sidewalk with water from the fountain, where children also bathed / swam. Very sad …

After five days in Asuncion, we jumped into our rental car to explore the Chaco. The Chaco is the part of Paraguay that lies west of the Paraguay River. It covers 60% of the surface of the country, but contains only 2% of its seven million inhabitants. To say it is nice and quiet here is an understatement. Our destination was Filadelfia, one of the communities established by Mennonites here. The road to Filadelfia was surprisingly good, at least the first 350 km. The 180 km after that were full of holes, and so the trip took us more than 6 hours. But at least we arrived safely, which is more than the drivers of the overturned truck and the upside-down car that we encountered along the way can say.

The Mennonites are a Christian community from the times of Luther, who have taken on the name of the Frisian Menno Simons, who converted to their belief some time in the fifteenhundreds. They were persecuted but did not want to flee just anywhere, because they were pacifist (and therefore did not want to be drafted into any army) and they wanted to send their children to their own, German-speaking schools with religious instruction. Every time they found somewhere to live, in Prussia, then in Russia, then in Canada and the Ukraine, after a while their special privileges were taken from them and they had to find another home. 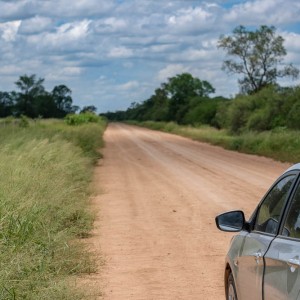 Empty roads in the Chaco

These days, that home is in the Chaco in Paraguay. After a violent war with his neighbors in the 19th century, Paraguay had lost a large part of its male population and was looking to repopulate. Moreover, there were occasional conflicts with Bolivia about the Chaco, so it seemed a good idea to the Paraguayan government to let some of their “own” people live in the sparsely populated area. During the Chaco war with Bolivia between 1932 and 1935, the fact that there were already some Mennonites living in the area who could help with the food supply and staffing of the hospitals, came in handy.

For us it is special to view this piece of recent history up close and personal. Filadelfia has a square grid for a street plan, with very broad roads. The houses are not directly on the street, so when you drive around, it all gives a very deserted impression. The people speak German, Spanish and Guaraní; signs are usually in German and Spanish. The Mennonite cooperatives seem to own or manage everything, from the supermarket to the social service and the hotel we are in. In Filadelfia everything belongs to the Fernheim cooperative – although we are not enirely sure if it really is an ownership relation. Eerything is branded with the cooperative’s logo, at least.

Large-scale tourism has not yet penetrated here. The museums are tiny, and often we were the only visitors. At Fortin Boqueron, where a decisive battle in the Chaco war took place, we first thought the museum was closed, but the caretaker who lived next door was perfectly willing to open the door for us. The most commercial farm for ecotourism (because it has a poster in the teeny tiny tourism office), turned out to be a kind of home-made petting zoo and we were the only guests there as well. A lovely place, by the way.

Tomorrow we will go back to the east, to San Bernardino. That’s a place on a lake where the Asuncion’s rich & famous spend their holidays this time of year. I’m very curious…