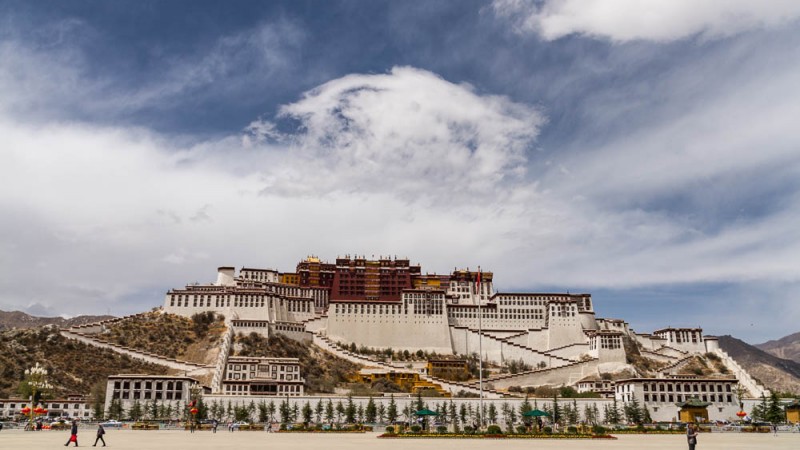 Lhasa is the capital of the ‘Tibet Autonomous Region’ and is at an altitude of 3650m. The altitude is noticeable. Staying at an altitude between 2500 and 3000m in Bhutan before did make a difference as we only really felt it on the day we arrived.

Tibet is officially part of China and therefore Lhasa is not a real capital. With 400,000 souls it is not a very big city either. Because of the Chinese influence and the pace at which ugly buildings are being built, it also isn’t a pretty city. You can tell that the Tibetans do not like the increasing influence of the Han Chinese: our Tibetan guide was constantly referring to the Chinese as mosquitoes. There are so many of them and they are very annoying. And the Tibetans don’t like the Chinese because they never smile. We were requested not to ask any politically sensitive questions as the walls have ears. How sensitive things are, becomes clear when you see the overwhelming presence of police and military. In the past protesting monks have set themselves on fire and when you see that the fire extinguisher is now standard military issue it makes you think… 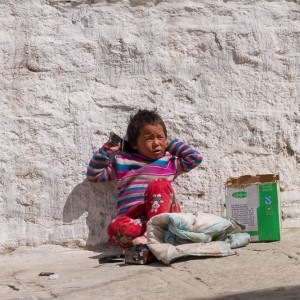 The relationship with China is complicated. They invaded Tibet in 1950 claiming they were ‘liberating’ over one million Tibetans from feudal serfdom after a period of de facto independence as a result of the fall of the Qing dynasty. During the cultural revolution they destroyed, as they did elsewhere in China, a lot of the cultural heritage. That does not make you good friends. In every way they can, the Chinese try to make clear that they are the bringers of progress. They did invest heavily in infrastructure, schools, hospitals and such and you can tell; roads are generally in good shape and there is no way you can shoot a picture without an electricity cable in the frame.

Because it was a requirement for the Tibet permit, we traveled the past 11 days with a tour group. It was a mixed group of 9 with whom we, together with a guide and driver, explored part of Tibet. Apart from the visit to the famous Potala Palace, the Dalai Lama’s former winter residence, the stunning views and the deep blue skies, the very highlight has to be the trip to mount Everest. Because of the long drive we spent the night at a very primitive guest house near base camp. It is at 5200 meters altitude and that guarantees a poor night’s sleep. Even worse, you don’t sleep at all ánd you get a horrible headache. But the super clear sky in the morning made the highest ‘hill’ in the world look spectacular at sunrise. Absolutely a unique experience.
Speaking of primitive: sharing the bedroom with others is one thing but spending the night without any running water (let alone a shower) and a hole in the ground for toilet is another. 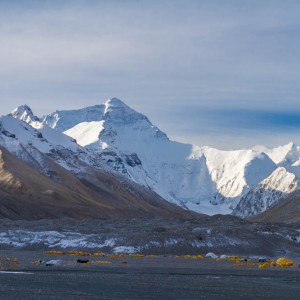 By now, we are pretty much fed up with being driven around. The distances are long and what makes it worse is that it takes at least double the necessary amount of time to get there. That’s because the Chinese have implemented a rather primitive kind of average speed checking. You have to report to a police checkpost every so many kilometers where they will give you a time at which you have to report to the next checkpoint. Getting there early means a hefty fine. Fact is that the Chinese drive like complete idiots so there is a point to this but it also results in people deliberately driving extremely slow or even standing still on the road just to prevent the fine. How’s that for effectiveness?

You really need to take care on the road anyways because before you know it a herd of yaks may cross the road. They are impressive animals that, just like in Bhutan, play a big role in Tibetan life. And I have to say, I really enjoyed the yak momo’s, a local specialty that is a kind of dumpling with yak meat.

It was different for us traveling with a group again but at the same time lots of fun. We’ve met some great fellow travellers and together we’ve experienced very special things. Especially when the guide took us to the local club where they are not used to foreigners at all. Dancing is done the typical Chinese way: line dancing. We have tried to join them which really caught the locals’ eye. When you get a chance to show them your own moves, you have got all their attention. To quote Britney Spears (from Will.I.am’s Scream & Shout): “Everybody at the club… All eyes on us… All eyes on us…” 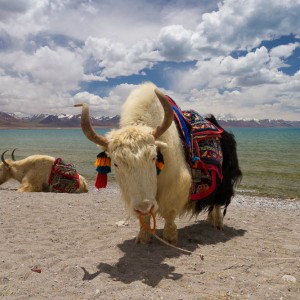