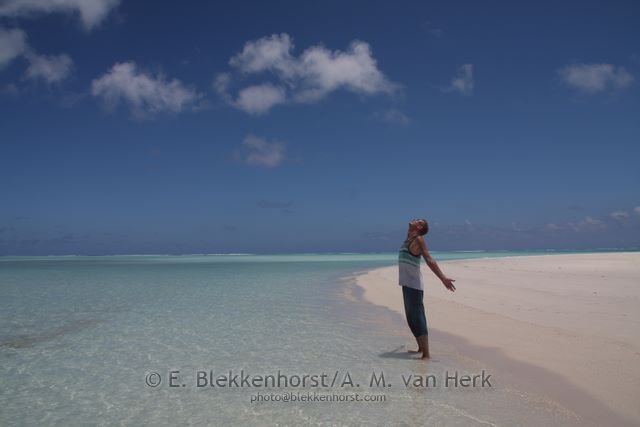 It’s bizarre how a single Dutch company can have such a big influence on such a remote place as Aitutaki in the Cook Islands. I’m not talking about the Dutch East India Company or V.O.C., but a more contemporary one: Endemol. It was their globally successful reality TV show Big Brother that had a whole series of other, similar, reality TV shows taking off soon there after. One of them was the popular castaway show Survivor (in other countries known as Expedition: Robinson) where a bunch of crazy people are isolated in the wilderness and compete for cash and other prizes. They needed a couple of tropical islands for that and came to Aitutaki. For a lot of money they had a big part of the lagoon (with seven islands in it) sealed off for months. No tourists allowed so they had to compensate the losses of the local tourist industry. In 2001, when the show started, in 3 months time some 4 million (kiwi) dollars where spent in Aitutaki alone, giving the local economy an enormous boost. It’s not so hard to understand that the local people (1800 souls) are generally very happy that the TV companies kept coming back and support the production of the BBC’s series Shipwrecked: Battle Of The Islands 2009 that is being filmed here right now. Luckily they cut it down to only a couple of islands so the lagoon is, except for those islands, open to visitors.

The lagoon cruise is the ‘Must Do While In Aitutaki’ tourist attraction. We kept it for last so it wasn’t until last Sunday that we did the cruise. And we have to admit; it’s fantastic.. We have never seen waters so incredibly blue and beaches so white. So it looks like Aitutaki beats Palau in the category “Most beautiful lagoon & beach”.. 🙂 The tour itself (Aitutaki Adventures on a Sunday is highly recommended) is fun; you’re out in the lagoon for most of the day, you get to swim and snorkel at a few different places, there’s some turtle and bird spotting going on, lunch on the beach is delicious and there’s the mandatory stop at a few sand banks from which you can take that perfect paradise picture with some of the tropical islands as back drop.

The next day we had to fly back to Rarotonga as it was time to move on to French Polynesia. We felt a little sad when we left for Pape’ete, Tahiti, because we loved being in the Cook Islands and we know we will miss it. At the same time we realised that we were at the brink of a new adventure; French Polynesia! After having been to Martinique and Guadeloupe in the Caribbean (our first holiday together, a long time ago), where everything seemed so French and therefore spoiled, we were rather sceptic. And boy, have the French messed the place up.. Even though Tahiti has less than 180,000 inhabitants, it feels as if you’re in busy France. Especially coming from the Cook Islands, Pape’ete is like a metropolis. There are a few stretches of real highway where people speed and drive dangerously (just like back home), everything (including the wine!) is awfully expensive and the coffee is horrible. But, after having spent a day driving around the island, we know it is also a beautiful tropical island with some of the highest mountains in the South Pacific (2200 meters) and great fun to visit. After visiting the museum in his name, we also learned that even more than a hundred years ago Paul Gauguin already thought that the French had completely destroyed the Polynesian culture of Tahiti. Then again, just like his mate Vincent van Gogh, he was mentally disturbed.