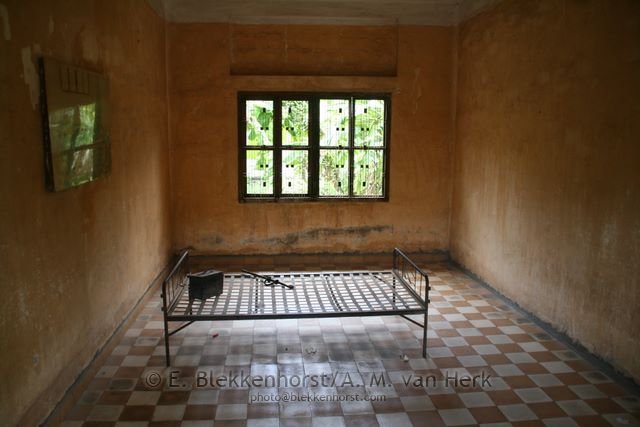 Phnom Penh’s attractions range from the terrifying and depressing to the very beautiful. The Tuol Sleng museum definitely belongs in the first category: This former school building was transformed by Pol Pot into S-21, a ‘security center’ where he held ‘enemies’ of his regime prisoner, and tortured them before having them murdered at one of the killing fields. The classrooms, that were converted into cells and torture chambers, still look very much like they did 30 years ago. A number of rooms is filled with photographs of the victims that passed through here, and history comes alive with the many signs that tell the stories of the victims, their families and even some of the Khmer Rouge members.

Equally terrible but impressive are the killing fields of Choeung Ek – some 20.000 people were murdered here, and the skulls of 9000 of them are on display in a large stupa on the terrain. However, the thing that truly gripped me were the pieces of victim’s clothing that had come to the surface in different places – apparently that still happens a lot, especially after heavy rains.

Fortunately, Phnom Penh also has some happier sights, such as the Royal Palace for example. It consists of many buildings in a green, parklike setting, and truly is a crib fit for a king: with buddha statues made of emerald and gold, inlaid with diamonds, and a temple with a 5000+ kilo silver floor, among other things.

After a 4-hour bus trip yesterday, we are now in Sihanoukville. A lovely little seaside village, except for the thunderstorms and incessant rain that has been falling since last night. We’re hoping it will clear up later today so that we can at least stock up on reading materials without getting wet.