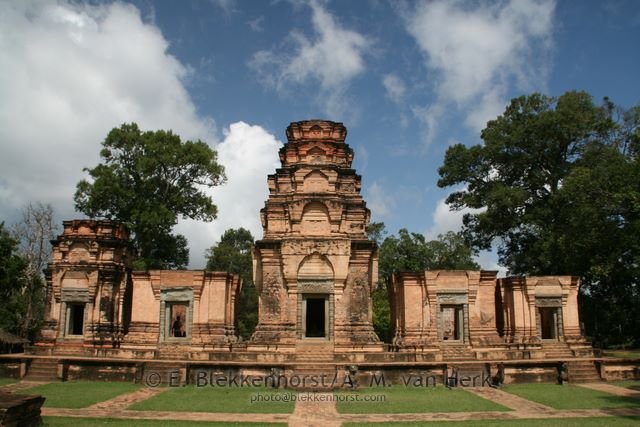 Siem Reap, which is the town near the Angkor ruins site, literally means ‘Defeat of Siam’. A good indication of the understanding Cambodians (Khmer) have with Thailand. The only reason people go there is to visit the (ruins of the) Angkor temples. Angkor was the seat of the mighty Khmer Empire which flourished between the 9th century to the 15th century A.D. and today its ruins are Cambodia’s national pride. With over 400 square miles it is considered to have been the largest preindustrial city in the world. The site actually consists of a large number of temples in various states; most are in reasonably good shape or are partly restored. Some are mostly ruins, pretty much reclaimed by the jungle. It is no surprise that some of these temples (especially Ta Prohm, entwined with trees) figured in Lara Croft’s Tomb Raider movie. Lara Croft is of course Angelina (Ange) Jolie who adopted a Cambodian orphan and is known to visit Cambodia regularly. We didn’t run into her though (or Brad for that matter).

The weather wasn’t all that good in Sihanoukville but it was nice to relax for a couple of days, read some books and jump in the pool before heading to Siem Reap. We took the bus back to Phnom Penh (which gave us a chance to visit the National Museum there) and embarked the fast boat to Siem Reap the next day. The boat is just as fast as the bus but it is far more comfortable and it takes you across the Tonlé Sap river and lake. The unique Tonlé Sap lake (the largest in south east Asia and a UNESCO biosphere) fills itself during the wet season with water from the Mekong river and drains itself back into the Mekong during the dry season which makes it a huge floodplain. Its rich biodiversity is providing over 75% of Cambodia’s annual inland fish catch and 60% of the Cambodians’ protein intake. It also makes for a nice boat ride. 😉

Siem Reap is not very exciting but it’s pleasant enough to stay there while you visit the Angkor temples. They are a couple of kilometers down the road but the distance between all the temples calls for a Tuk Tuk rented for the day. The rides were actually very pleasant; the scenery is very nice and because of the heat and humidity you really needed the time to cool off before visiting yet another temple. We spent two days there which is barely enough to see most of the important ruins (and have some spare time to cool off in the hotel pool) and saved the most famous one, Angkor Wat, for last. As it usually goes, that made it a bit of a disappointment. It is the biggest one of all, best restored and with the most beautiful encarvings but it doesn’t beat that dramatic Tomb Raider (or Indiana Jones if you will) effect of the ruins covered by huge trees.