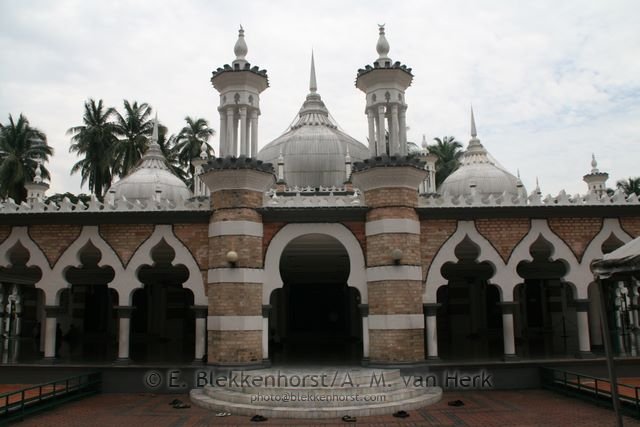 Time flies when you’re having fun. It seems like we left Cambodia a very long time ago, when in fact it’s been only 4 days. First stop after Siem Reap was Singapore, where we spent a day and a half before picking up our diving gear again. Because this was our second time in Singapore in a few months, there weren’t many sights we wanted to see (again) and we took it nice and slow. The one trip we did take was to the Malay quarter, around Joo Chiat road, where there are a number of typical and rather cute shophouses. We had dinner in Holland Village, which is not a village at all but a road with a number of bars and restaurants on it – Mexican, Italian, you name’ it, but nothing Dutch (not that we were looking for that).

With the dive bag back in our possession, the 15 kg baggage limit imposed by Air Asia was a bit of a problem. Although we’ve miraculously managed to get the total weight of our two large backs down to 48 kg, mostly by stuffing anything heavy in Erwin’s backpack, it was obvious from the start we’d have way too much stuff to take on board for free. Enter Erwin’s foot… I don’t know how exactly he pulled it off, but by pushing his foot under the dive bag he managed to convince the lady at the check in counter that it weighed only 16 kg… she explained very friendly that she’d let that one go, but that we’d have to pay for the other bag. Wow! Let’s see if we can do that again! We saved around 35 euro this way…

If you ever decide to stay a few days in Kuala Lumpur on a stop over from Europe to Australia for example, you should know that the airport is a full 50 km from the city, and the low cost carrier terminal where we arrived is even 70 km out of town! As we arrived late in the evening the traffic was fine, but during the day it would be a long trip by road. When we started exploring the city the next day, we were a bit disappointed at first. Kuala Lumpur has some pretty buildings and nice looking streets, but you have to look very hard to see them. Apart from the shophouses, some nice English buildings and a few temples, there are many mosques. Malaysia is a muslim country, after all. You might as well wear shorts and a tank top if you want to visit them, because I was dressed modestly and I still needed to put on a long gown and a scarf. Annoying! Another thing that I can never get used to is the black ‘ghosts’ you see every now and then: ladies covered from head to toe in black, sometimes even with their eyes covered. (I watched them eat during breakfast in our hotel and they lift a little flap every time they want to take a bite, probably a good way to lose weight because it must slow you down). And of course, theý are accompanied by men in shorts or jeans and t-shirts! It really makes me angry. Because Malaysia is such a popular holiday (and diving) destination these days you tend to forget, but they still have censorship here, and odd things like a dress code for artists (which is why Beyoncé cancelled a concert scheduled in Malaysia).

One thing Kuala Lumpur is very good for, though, is shopping. Not that that was of much use to me, because we’re on a very strict diet, baggage wise. But articles like clothing and electronics are very cheap here, even cheaper than in Singapore. So when Erwin had the opportunity to earn 150 euro with a single purchase, he could not pass it up. We had to make our way to a rather seedy little shop in a seedy mall with no tourists at all, but there he managed to trade in his Canon EOS 400D camera for a 40D. Although that sounds like a step back I’ve been told it’s actually a step up and Erwin is happily trying out its new features while I am typing this. Expect even better pictures to be posted to our site from now on!