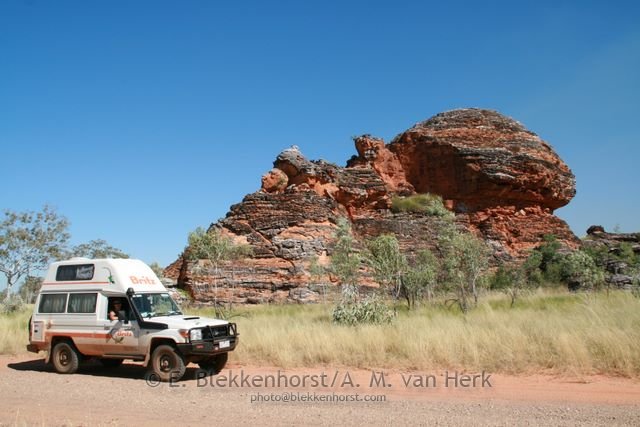 Port Hedland was already warm but when we arrived in Broome we quickly realized that things could get a lot hotter still. Temperatures in the high thirties during the day. Temperatures in the high thirties during the night. The 12 dollars for an electrical fan turned out to be one of the best investments of our trip, just like the two plastic wine glasses we bought earlier.. 😉 The local Britz office refunded our leaking roof repair costs and replaced a broken chair, our table and can opener. No questions asked… Broome is the last ‘large’ town before entering The Kimberley, the rugged and empty area in the North of Western Australia. The Kimberley has only recently been discovered by tourists and not everything is easily accessible; most of it is accessed through the Gibb River Road, a 600+ km dirt road that is mostly closed during the wet (season) as many of the river crossings are impassable. April is the beginning of the dry so we hoped very much it would be all open. Unfortunately you cannot count on weather these days and the cyclone that gave us the rain some time ago certainly didn’t help. We kept our fingers crossed as we went to Derby, the gateway to The Kimberley, and checked the latest road conditions. The Gibb River Road was still partly closed to all traffic as were all the access roads to the parks and gorges along the way.. Bummer. Time for an alternate plan. Basically we had no other option but to continue along the Great Northern Highway that takes you well around the rougher areas..

In Fitzroy Crossing we visited the Geiki Gorge which was, hmm, another gorge. It was the first river with crocodile warning signs as the North is crocodile country, but we didn’t see any. Then again, the rule is; if you see a salty (salt water crocodile that also likes fresh water and sees humans as a nice variety in its diet), then you’re too close anyways… Halls Creek was slightly better; there we visited the cute Caroline’s pool and the China Wall, a stretch of whitish limestone rock that looks a bit like a man made wall and with a little imagination resembles the famous wall in China. We also traveled the 150 km dirt road (only open to 4WD traffic) back and forth to see the Wolfe Meteorite Crater, the second largest meteorite crater in the world (the largest one apparently being in Nevada).

One of the big attractions of The Kimberley, one that we definitely had to see, is Bungle Bungle (Purnululu) National Park. This isolated park with fantastic rock formations and gorges was only discovered in the 1980’s (although the Aboriginals knew of it for a long time) and open to the public since 1987. It’s only accessible by 4WD car and when the Aussies say only 4WD they mean only 4WD… Even though we were already used to dirt road driving at high speeds (up to 110km/h), the 50 odd kilometers of dirt track into Bungle Bungle was of a different order; it took us 2 hours and 10 minutes. The rocky, sandy, stony, muddy and sometimes wet track was difficult and certainly not for a normal car but that adds to the attraction (if you happen to drive a 4WD car anyways). The park itself is fantastic. The beehive like and dome rock formations are spectacular. We walked two of the tracks in the Northern part on our first day, spent the night on the campsite in the park and walked the other tracks at the other end of the park the next day. The views, the rocks and their surreal changing colors as the sun travels across the sky are amazing. Our expectations were high but we both loved the park very much.