X-mas on Lombok and NYE in Sydney

X-mas on Lombok and NYE in Sydney 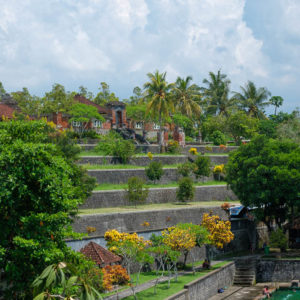 Lombok is predominantly Islamic and therefore we did not have high expectations of Christmas celebrations this year. There is Christmas decoration everywhere and you are invariably offered a “Merry Christmas and a happy new year”. But no matter how decorative, snowmen and reindeer don’t cut it when it is above 30 degrees Celsius and a humidity of around 100%. We were surprised to find a real (fake) Christmas tree with plastic decorations and flashing lights in our house that was especially popular with Leo, our young neighbour cat. There’s nothing more interesting than slapping your paw against those decorations.

In our naivety, we also thought that Christmas Day would be a nice and quiet and therefore a good day for a daytrip. The guided tours at the temples of Mayura Park and Pura Lingsar were fun but at the Narmada water park it turned out to be a lot busier. At the Stokel and Kelambu waterfalls it was simply terribly busy. Apparently Christmas Day is also a national day off and therefore a good time to visit a waterfall. That means that you have to share the view and taking photos without people in it is simply not possible. It is still very amusing to watch others enjoy themselves on such a day out. And being one of the very few tourists among all these locals you’re sure to attract a lot of attention. 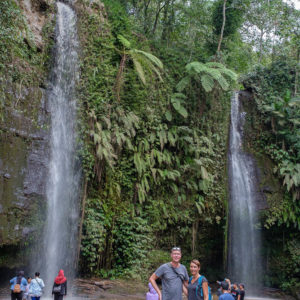 Our house was in the neighbourhood of Senggigi, a little seaside resort on the north-west side of Lombok. It is relatively small and quite pleasant. Especially when compared to the seaside town of Kuta Lombok in the south. There is less rain there (except when we were there) and the beaches are very beautiful. But it is also much more touristy. If only because the new international airport is close by and direct flights are arriving from, among other places, Perth. We thought it would be worthwhile to visit the area on a day trip. It was also a good opportunity to pay a visit to the beautiful, newly opened surf resort LMBK Surf Camp (https://www.lmbksurfcamp.com) owned by a colleague of Annemieke. And so, despite the fact that we have taken it easy, we have seen some of the island.

When we celebrated New Year’s Eve two years ago with our bare feet on the beach of the Copa Cabana in Rio de Janeiro, we said to each other: this must be the coolest place in the world to herald the New Year. The fireworks, the atmosphere, the music and partying on the beach with a million other people. And all for free too! Nothing can beat that. Or maybe … Sydney?

There is only one way to find out, we told each other, by experiencing it once. It is no coincidence that we traveled from Lombok to Sydney, Australia just before New Year’s Eve.

We have settled in Sydney in a lovely house in the Neutral Bay residential area, on the north side of the city but still within walking distance of the famous Harbour Bridge. This is where the annual firework show is so you want to make sure you’re close. We figured out a long time ago that all the good places are not for free (or rather seriously expensive). A few months ago we had arranged tickets for Harbour Party (https://harbourparty.com), a new year’s eve  party in the famous Luna Park, an amusement park at the foot of the bridge. Being the spoiled kids that we are (YOLO!), we decided to also get VIP tickets which included not only drinks and food but which also gave exclusive access to the best places on the waterfront to watch the fireworks. And that did not disappoint. We had a great evening, which ended with a nice party, and we could just walk home afterwards.

When asked what the best place is to celebrate New Year’s Eve, we don’t know the answer yet. Rio and Sydney, they both have pros and cons. Maybe we should do it all over again, just to be sure? 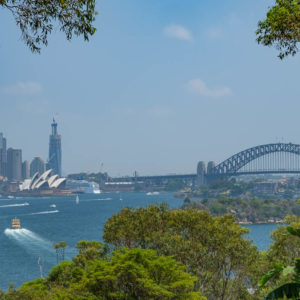 Or maybe not. The discussion about whether or not to have the fireworks display has a serious tone here: a large part of the country is on fire as a result of the bush fires. And that is again the result of climate change. Why spend so much money on a fireworks display while only tens of miles away firefighters are risking their lives fighting a fight that may not be won? The expenses for the show had already been made, everything was already organised and there was no danger so there was no point in cancelling the show. If it would have been cancelled, we would have understood and respected it. A pity for us but there are more important things. We have no idea how the discussion will continue and whether this will lead to the abolition of the fireworks display, but the last word on this matter has not yet been said.