The Land of Smiles: from Phuket to Ko Samui 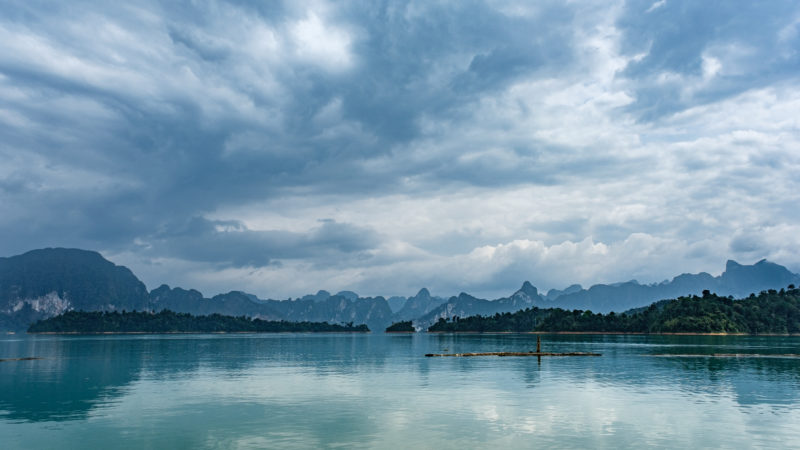 The Land of Smiles: from Phuket to Ko Samui

We are becoming *so* spoiled… because after a very luxurious week at the Paresa Resort, we found the Renaissance Phuket Resort & Spa, an hour further north, just a bit meh. Because: no private infinity pool with so much privacy that you can go skinny dipping, and only a buffet instead of a breakfast menu with a tasty ‘healthy’ item on it (yoghurt with nuts and fruit). We should quickly get both feet on the ground again, because traveling for four months at the level of the first week would surely break the bank. Incidentally, the Renaissance had a beautiful swimming pool, had a great location right next to the beach and an amazing service: while using the sun beds, you would regularly get free glasses of ice water. Nice touch! 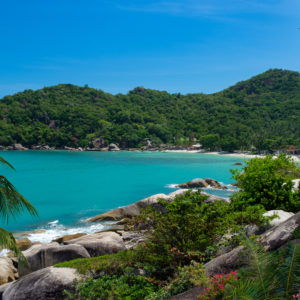 However, the two days at this beach in Mai Khao were mostly a stopover on the way to the Khao Sok National Park, and especially the Cheow Lan lake within it. This is a 185 km2 reservoir that was only created in the 1980s. It has an emerald green color and is fringed by tall karst rocks. And it’s gorgeous, it’s so beautiful! The lake has a number of floating hotels on it, and we had booked a weekend in one of them. The hotels on the lake generally have no phone service and no (or only very expensive) internet, so we didn’t want to go on weekdays when I still had work to do.

The boat trip to the hotel alone made the whole trip worthwhile. What a beautiful place! Even though it seemed quite busy at the pier from where we left, the lake is so big that we quickly lost the other boats. The same thing happened when we used the kayak in front of the room to explore the lake by ourselves: we were the only ones on the water, as far as we could see. Super cool. One very small miscalculation: on weekends this place is also visited by Thai families. Not only do they take more selfies and photos of each other than any other Asian tourist I’ve ever seen, they also make a lot of noise. Not great when you’re staying in a little rickety wooden house, but then again, it was nothing that a hard knock on the dividing wall could not solve.

Because it is not so easy to go out on your own when you’re staying at a floating hotel, we had booked a few excursions. Including an evening safari by boat. They phoned our room: did we really want to go, as it was going to rain? We thought it would be okay. And we were lucky: after sailing for a while, we saw a family of Indian bison, or gaurs. (Fun fact: the bull in the Red Bull logo is a gaur.) We caught a glimpse of them, but before Erwin could focus his camera, a torrential downpour broke out compared that made the deluge seem like a leaky faucet. Moral of the story: listen to the locals when they warn you about the weather… 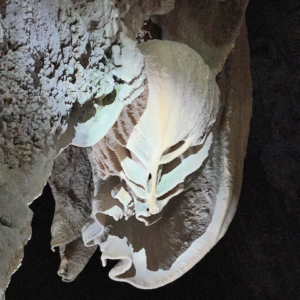 Next day’s afternoon excursion, to the Pakarang or Coral cave, was a bigger success. After another fantastic trip across another part of the lake we had to walk through the jungle for half an hour. Along the way we heard wild elephants and saw elephant tracks and traces of destruction, but unfortunately (or fortunately?) we did not encounter the elephants themselves. We did see two kinds of monkeys, and on the way back also a hornbill. After the walk we were taken on a bamboo raft to the cave, a large, beautiful stalactite cave. Always fun, and in combination with the beautiful walk and boat trip this was a great outing.

From Khao Sok we were taken to Surat Thani pier to catch the ferry to Ko Samui. The ferry was an old Chinese rust bucket, and as a pedestrian you could not just walk aboard: you had to be taken there by car. Confusing, but luckily, we had plenty of time. After a crossing of more than an hour and a half, the taxi driver we booked was already waiting for us – “Raja Ferry is never on time, Seatran has faster boats” – to take us to our Airbnb.

It had an infinity pool! And one of the very best kind: with a sea view. And lots of privacy. All very nice. The road to the house was steep and slippery in the rain, but the Ford Ranger pickup truck we rented the next day, expertly driven by Erwin, handled it just fine. And the house had some special design choices: such as pebbles on the floor in the shower, continuing in front of the sink. Not relaxed when you want to brush your teeth or wash your hands. 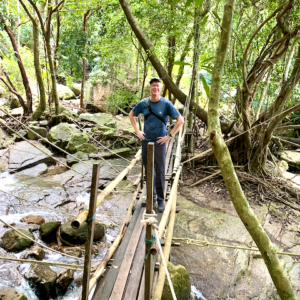 The week in this Airbnb on the southeast side of Ko Samui passed quickly and peacefully. Even though the weather was relatively bad (often cloudy and frequent showers) for this time of year, it was very hot – too hot to put in much effort. We visited the largest waterfall on the island, the Na Muang waterfall, which was nice, but not really impressive. Great, that meant that we didn’t necessarily have to visit the other waterfalls on the island. The thing I liked best about the waterfall were wooden-string bridges with planks and branches to get there.

We also visited a beach club here and there (the “world famous Nikki Beach Club”), Chaweng Beach, the Bo Phut fishing village, and the beautiful beach at Crystal Bay. It was relatively quiet everywhere, but in Chaweng Beach it was downright sad. Apparently it was a rather raunchy tourist spot before the pandemic (think: Russian Showgirls signboards), and now it was almost a ghost town with closed and dilapidated hotels, restaurants, and shops. 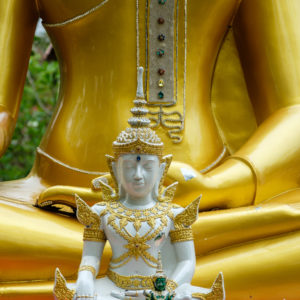 We decided that we liked the relaxed island life and that we could stay on Ko Samui for another week before we explore a new island, Ko Pha Ngan. After a pickup truck switch we are now in an Airbnb on the northwest side of the island. It also has an infinity pool, but we miscalculated a bit with this one, because it only has a view of the garden. We can only see the sea from the second floor of the house. Skinny dipping is no longer an option either, because we are afraid of the disapproving looks of the two old ladies in the house next to us. Unfortunately, the weather hasn’t gotten any better: last week we had so much rain that Erwin even gave up his three-week streak of swimming every day… so today we’re starting at day 1 again.