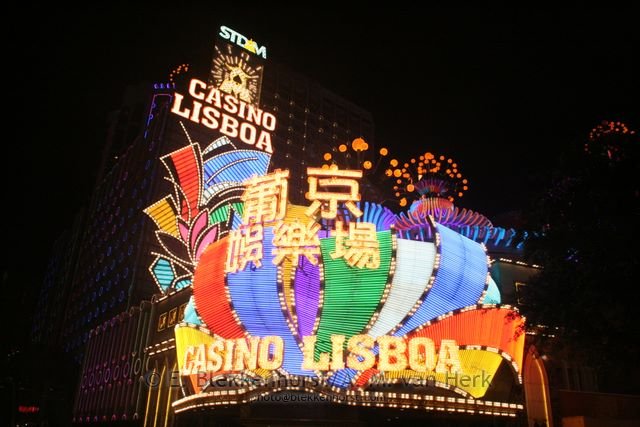 Macau (or Macao) is a great place to play the slot machines. We played them at all of the larger casinos for four days and actually won a few euros. 🙂 Even if you're not much of a gambler, a trip to the new casinos, especially The Venetian, is well worth it. The Venetian, which opened last year, is currently the biggest casino on this planet. Yes, it looks a lot like the one in Las Vegas, with the canals and the gondolas and all. The main difference being that 99.9% of the people you see here are Chinese.. The city itself is not very big; basically a small peninsula and two larger islands, tied together with a set of huge bridges. Its Portuguese heritage is clear; a couple of old forts, churches, squares and other old buildings in unmistaken old Portuguese style are found throughout town. A nice place to explore on foot. Unfortunately the humidity was near 100% so it wasn't all that great to be outside for too long. By taking it piece by piece over a couple of days, between the gambling, we managed to see most of it. We enjoyed watching the enormous casino neon displays at night, a short video of which will be included at the bottom of this post.
Yesterday morning we took a taxi to the border gateway to go to China. An exciting experience as the Chinese immigration officials wouldn't just let us pass. They thoroughly checked our passports and the many different stamps and visas we have collected in them. They asked us what the hell we did in Nepal and insisted on going through some, but surely not all, of our luggage. Only after they went through all the books we carried in our big bag and decided they were not of the subversive kind, they decided to let us go.. Pfew. We made it! We're in China!
From there we took a bus (okay after we finally found it, which was not easy) to Guangzhou (the capital of Guangdong, formerly known as Kanton) a large city some 160km North of Hong Kong. We wanted to do some sightseeing here today but it's been raining so hard all day that we spent most of the day online, getting some of our further travels into China sorted. Guangzhou is a modern city and things seem well organized here. We're very lucky that some signs are in a readable format because otherwise it's near impossible to find your way around.