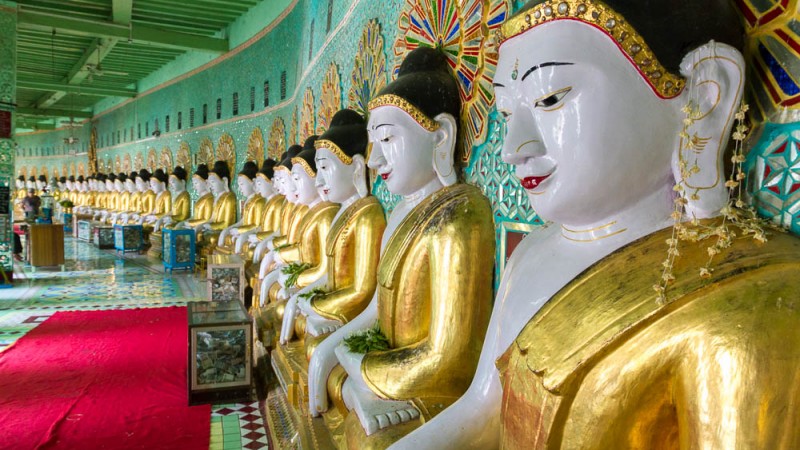 Do you know the phenomenon that a cup or glass seems to contain much more liquid when you accidentally spill it, than when you just drink it? Buckets and pans are subject to the same phenomenon, when their contents are emptied on you by people standing along the road as you drive by.

After the fifth day, we’ve had it with the water festival. Sure, the kids with their squirt guns and empty bottles are cute. And the many roadside parties with loud music and lots of water are fun to watch from an air-conditioned car. But the thick fire hoses that people use to drown you when you pass by and the complete buckets of water kids will throw when you’re a sitting duck in a slow horse cart: not so much fun. So we’re happy that today is Burmese New Year and the water festival is officially over. 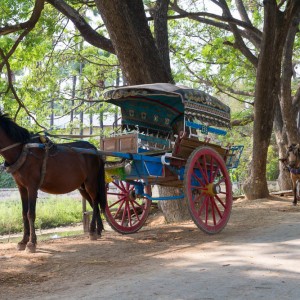 The horse cart was our mode of transport in Inwa or Ava, one of the old capital cities of Burma. It is located about 20 km south of Mandalay, where we are now. Somewhere in the 19th century the capital was moved after an earthquake, but pieces of the old city wall and some temples and monasteries remain. Inwa is located in a corner between two rivers and you arrive there by ferry. We did not expect the ferry to be a rickety long-tail boat with a monk as the only other passenger, but it did the job and got us across in a few minutes.

Another reason we’re not overly enthusiastic about the water festival, is that it seems to be an excuse for everyone, including our horse cart driver, to double their prices. The monk had warned us about this and offered to negotiate on our behalf, and drove along with us for a few minutes after that. In my opinion we still paid too much and this is when the difference between Erwin and me becomes clear. I imagine the monk said something like “I’ll get you a good price, dude, but in return I want to hitch a ride” to the horseman, but Erwin thinks Buddhist monks aren’t so cunning and that the good man really tried to help us. Either way, it does not matter because the horseman definitely needs our 15 euro more than we do. 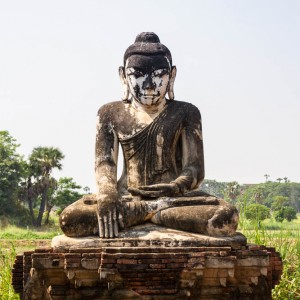 The ride itself was very nice. I like the pagodas that are half in ruins better than the new and shiny ones and that is saying something, because I love shiny stuff and the Burmese excel at shiny things. We noticed that again after we visited two more modern temples in nearby Sagaing after our visit to Inwa. Sagaing is partly on a hill, and the large numbers of gold stupas in the view never ceases to amaze me. The temples are being used all the time, you see people praying in them everywhere you go. I can’t imagine what it’s like to live in a society in which religion plays such a big part in people’s daily lives.

Tomorrow is our last day in Mandalay, and then we’re hoping to see the royal palace (it was closed during the water festival) and to take a boat to nearby Mingun, where they have a massive but unfinished pagoda. After the Disney meets Indiana Jones experience in Bagan, the hectic and chaotic Mandalay is something else. To me the city looks even bigger than Yangon, but in terms of population it comes second. The day after tomorrow we will fly to Inle Lake. That is located at around 800 m of altitude and that’s why it’s a lot cooler and hopefully more pleasant than here: only 30 degrees Celsius instead of 40+.