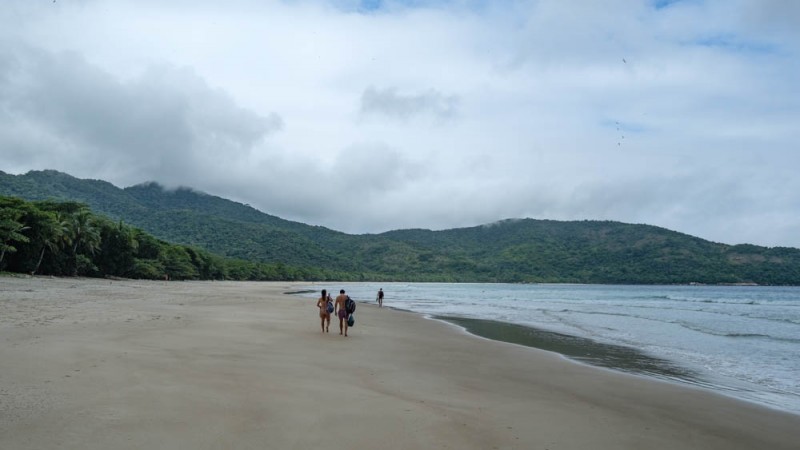 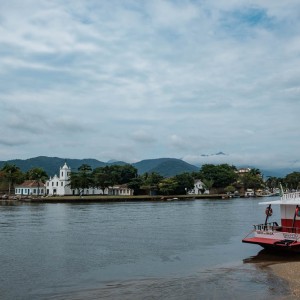 Barra da Tijuca is a pretty chic neighbourhood in Rio. There is not much to do other than visiting the mega-beach. But then the weather has to be nice. We spent a few days there doing laundry and buying local prepaid SIM cards. And that is quite a challenge. It’s difficult to find a salesperson who dares to speak English to help. In the largest shopping mall in Brazil, which was nearby, we finally succeeded. The Google translation app does wonders by the way. Now we are mobile and online in Brazil. Quite handy if you sometimes have to work. And also very useful when navigating on the road.

Driving in Brazil is not very difficult. A ride as the one from the airport right across Rio during rush hour is annoying because it takes forever, you do not know the way, and you have to adapt to local traffic. So, when in Rome, do as the Brazilians do. That means being rude. And especially be very alert. In the city but also on the motorway. There, a truck going uphill at a speed of 30 kilometers per hour can suddenly swerve to the left to overtake another, even slower, truck, while you are come up behind with a speed of over 100 kilometers per hour. Other than that, it is easy to do and is a nice way to discover a large area. 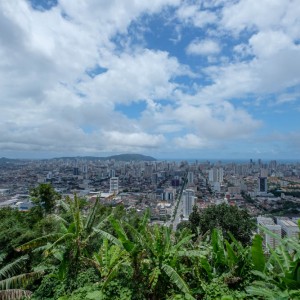 From Rio we drove south to discover the south coast. A large part of it is dominated by the Serra do Mar, a mountain range that runs along the Atlantic coast and the Mata Atlantica, the Atlantic rainforest. That makes the area very beautiful. It is super green and the rugged coastline is interrupted by beautiful beaches.

A little further south of Rio is the beautiful island of Ilha Grande. It is known for its gorgeous beaches that are often only accessible by boat or after a long hike. The weather wasn’t always that good but that did not stop us from visiting a number of beaches, including the second most beautiful beach in Brazil: Praia de Lopes Mendes. The car-free island is very touristy and therefore occasionally quite busy. Especially when a huge cruise ship has anchored. And there are too many dogs. They are barely looked after, so they do their business everywhere. Including the beaches.

The town of Paraty is known for its historic center, a remnant of its Portuguese colonial past. The port developed in the 17th and 18th centuries, during the Brazilian gold rush. It is great to stroll through the old streets with its beautiful and colourful old buildings. Because of the rough paving with large boulders you have to be very careful where you walk. And after a few days you get a little fed up with that.

From Paraty we went further down the coast to Santos. This is a big city south of São Paulo where the large seaport provides access to the hinterland. The city was founded in 1546 and still has a nice, albeit dilapidated, historical center. It is best known for its beautiful beaches. But also because of Santos FC, the football club where Pelé started his impressive career at the age of fifteen. 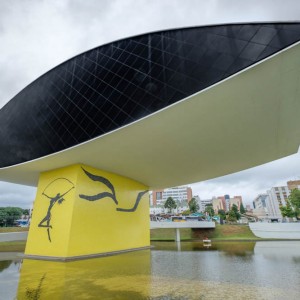 Further south, in the state of Paraná, lies the city of Curitiba. It is more inland and, because of the Serra do Mar, lies at an altitude of over 900 meters. It is small for Brazilian standards: only 1.8 million inhabitants. That makes it easier, more friendly and pleasant to stay for a while. We found a beautiful house via AirBnB, just outside the center, from where we could easily explore the city, even by bike!

The most important highlight is the Oscar Niemeyer museum (MON). The beautiful building alone, which has the shape of a hovering eye, is worth a visit. We had already seen some of Niemeyer’s buildings during our previous visit to Brazil, especially in the capital Brasilia, and this was another reminder of how great the buildings of the hand of this exceptional architect are.

We have taken residence in the neighbourhood of Florianópolis, the southernmost destination on the Brazilian coast that we will visit during this trip. Floripa, as the city is also called, lies partly on the mainland and partly on a large island, Ilha de Santa Catarina. The bridge in between is the longest suspension bridge of the country. It is a popular place because of its fantastic location, the beautiful beaches and the ideal conditions for all kinds of water sports. It has been voted the best place to live in Brazil by a leading weekly magazine. We can see why and you notice that too. There is a lot of construction going on and it is busy. It is a beautiful mountainous island with gorgeous coastlines, bays, beaches, lakes and a real river. It suddenly becomes a bit less idyllic when you are stuck in a serious traffic jam just to get to a beach. 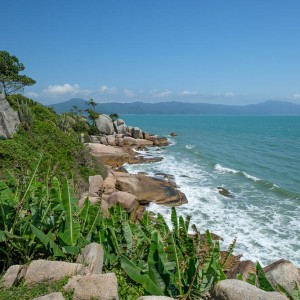 Fortunately, there are still places where it is quiet even at weekends. You will have to drive all the way to the southernmost point, which is a great trip in itself, after which a nice walk of 45 minutes takes you through the forest before you reach a beautiful and very quiet beach.

We are staying in the converted studio of a British artist, which is beautifully placed against a hill with a great view of one of the lakes. In a few moments we will take an Uber to one of the beaches to drink a caipira or Brahma beer and toast to the perfect winter.