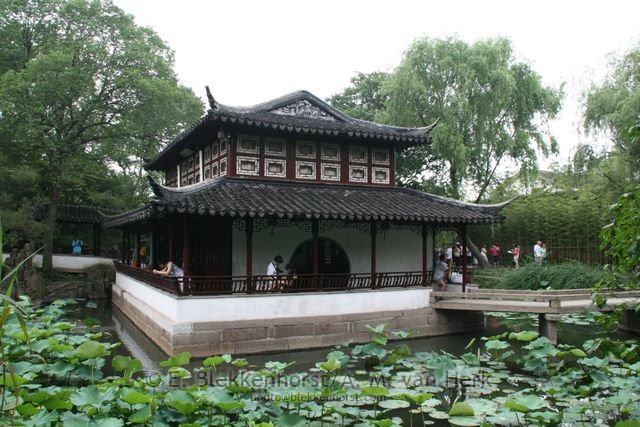 Shanghai is totally different from Beijing. It’s more like Hong Kong with the huge sky scrapers and skyline. It has a more fast paced business like feel to it whereas Beijing seemed more laid back and friendly. It is a good place to stay for a few days. See the highlights (there’s not that many of them anyways), visit the museum, do some much needed shopping (I needed new socks and shirts, not easy to find in my size) and take the train to Suzhou for a nice daytrip outside the big city.

In the 19th century Shanghai was forced to allow foreign countries to have trading posts built within the city. These so called concessions were small foreign cities within the city giving Shanghai a very colonial feel. There’s not that much left today that reminds of that era, except for The Bund; the strip along the Huangpu river facing the sky scrapers of Pudong. There’s the old hotels, banks and clubs in various styles, all symbols of the Western imperialism. The futuristic Pudong skyline is quite the opposite. It is said to be the largest area with tall buildings in the world. We went up the 457m high Oriental Pearl TV Tower to admire the view but the nearby Shanghai Financial Center is, for now, the higher building..

Suzhou is a town about an hour away by train (a little less by super fast 250 km/h D-train) and is famous for its old Chinese gardens. Nice gardens but they’re not really my style and I’m already looking forward to seeing Japanese gardens.. The exciting part of such a trip is of course finding your way around the Chinese train system. But, experienced travelers as we are, that was not a problem for us.. 🙂

View from Oriental Pearl Tower on The Bund