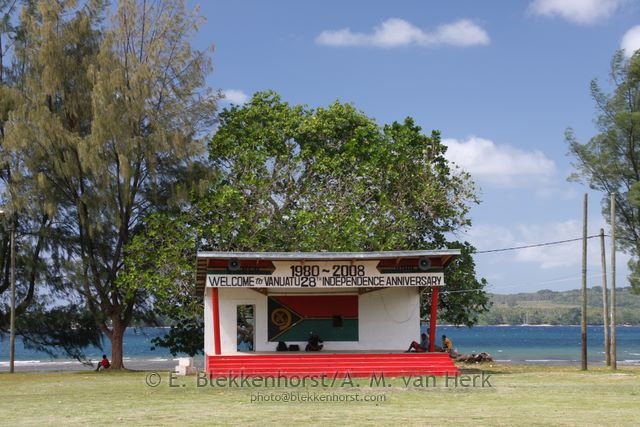 The roads on Efate in Vanuatu are not that bad. As long as you stay within the city limits of Port Vila. The main road that circles the island (some 140Km) is unpaved and there are more pot holes than there is road.. The good news is that Vanuatu applied and qualified for the U.S. Milennium Challenge grant. A fund that allows them to renew and upgrade their infrastructure. The bad news is that the needed materials have only justed started to come in from New Zealand by ship.. So to go around the island you still need a 4WD car. The car rental company only had a Ssang Yong Korando available for us. Probably the worst car I have ever driven.. Well it got us around the beautiful island with its nice beaches and we had great fun. People smiled and waved at us everywhere as we passed by. Incredibly nice and friendly..

The past four days we have been on the largest island in Vanuatu, Espiritu Santo (or just Santo), a flight just under one hour north from Efate. The island is visited mostly by scuba divers as this is the place where, apart from ‘Million Dollar Point’ which Miek mentioned in the previous post, one of the largest and most accessible wrecks in the world can be found. The S.S. President Coolidge was a luxury cruiser (a Dollar class ship, some people compare it with the Titanic) built in 1931, confiscated and turned into a cargo ship during WWII. Unfortunately it hit friendly mines just off Santo and sank.. Lying on its port side, only a few minutes swim from the beach and its bow only 18 meters deep, it is the ideal wreck for diving. Dives can be pretty deep when you penetrate the wreck but it’s great fun and well worth it. We did the engine room yesterday at 46 meters (our Suunto computers forced us to have a deco stop of 22 minutes) but if you want to go to the stern, you’re looking at 67 meters straight down (for all the worried mums and dads; no we didn’t do that). Last night we did a night dive which was, well, exciting.. The wreck is full of ‘flash light’ fish which glow in the dark every now and again. If you approach them in total darkness (no torches on!) the sight is spectactular and can be very disorienting. I thought it was kind of ‘spacy’ and was so distracted by it that I had not noticed that the rest of our group (including my buddy Miek) had moved, still in total darkness, on to the next cargo bay. It took a while before I realised I was all alone and luckily by then the dive guide realized one of us was missing and came back to get me… No reason for panic but the next night dives we will be holding hands the whole time just to be sure we will not get seperated again..

Today, our last day on Santo so no diving, we will be going on a tour to the Blue Hole. Tomorrow we will be flying back to Port Vila and later that day on to Tanna. We booked an overnight tour to Tanna, an island South of Efate, to see Mt Yasur, an active volcano which is easily accessible. Let’s hope we can catch a glimpse of the glowing lava from the rim at night.