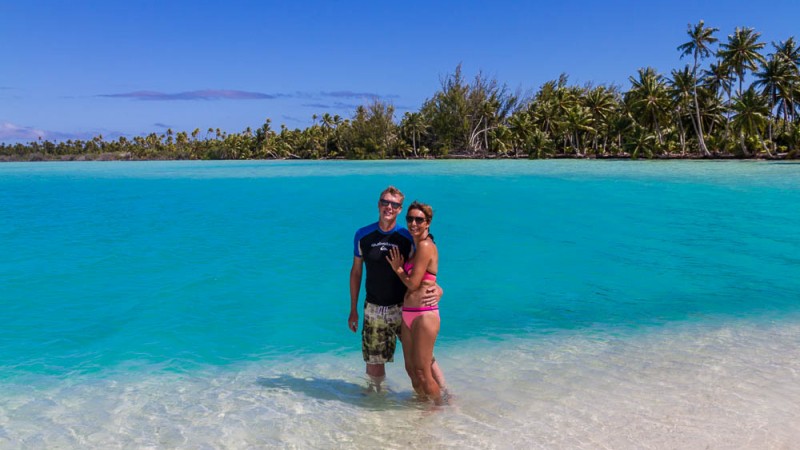 When we visited Rangiroa eight years ago, where we did some fabulous diving, someone told us: “if you enjoy diving here, you should go to Fakarava – the diving is even better there.” It’s taken a while, but here we are! 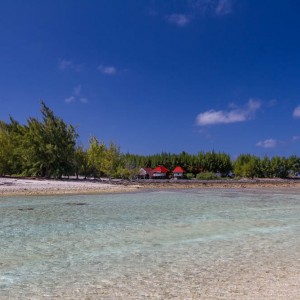 Because the distance between the two passes is quite large, we first stayed a few days on a little motu near the south pass. The biggest challenge on such a small postage stamp of land in the middle of the ocean is sweet water. Only rain water is available, and during the winter, it does no rain very often. Therefore, there are no proper taps in our cabin, just a shower head that you need to squeeze in order for water to flow – which makes washing your hands a challenge. Flushing the toilet is discouraged. The situation at the dive shop a few motus further down is even more challenging. During our stay they ran out of water altogether, so we could not rinse our gear.

However, the diving was spectacular. Four groups of sharks live inside the pass, more than 750 animals altogether. During every dive, you encounter tens if not hundreds of them. Too many to count, anyway. In most parts of the world, we are happy if we encounter one or two reef sharks during our dives. Here, you see those while snorkelling or standing at the water’s edge for a few minutes. While diving, you see scores of grey reef sharks, black tip, white tip and silver tip sharks. It was the wrong season for hammerhead sharks. Tiger, lemon and whale sharks also frequent the pass but unfortunately we did not get to see those. Other than Rangiroa, the sharks aren’t too deep here, so if you stay at 25-30 m for a while, you’re right in the middle of them. With regards to sharks, we’re spoiled for the rest of our lives now. 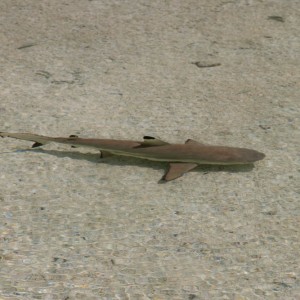 After playing Robinson Crusoe for a few days, we took the boat up north. Now we had a shower with plenty and hot water, and an actual working tap, an enormous luxury. Our bungalow was right on the water and the pension was next to a lovely beach, with turquoise water just the way I like it.

Fakarava’s north pass is much wider than the south pass, and there are other things to admire besides sharks. Areas with pretty corals, plenty of shoals of fish, we saw tunas on a regular basis and even a manta ray once. The dive shop was top notch, with hot showers and even towels provided. Because the dive shop is in the only village on Fakarava and our pension was a while away from it, we used the breaks between dives to have lunch there. ‘Village’ is an overstatement probably, as the entire island only has about eight hundred inhabitants. And zero coffee shops. 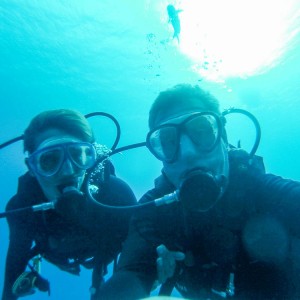 The lack of proper food and drink would annoy me if I lived here. Coffee, cheese, wine, dry sausages, whole grain bread… it is either unavailable or undrinkable. And it’s a shame that Polynesia is so very far away from home. And that there are so many French people in French Polynesia, whose English is shockingly bad or non-existent. But oh, how beautiful it is around here… Fakarava has its very own ‘Blue Lagoon’ and of course we went to see it. Just look at the pictures around this post, no further explanation necessary, I think?

Unfortunately, Fakarava is our last ‘real’ destination. After that, we’re going home via a day in Tahiti, a night in Auckland and two days in Melbourne. I DON’T WANT TO GO! Being at home has its advantages, but a couple of weeks there every now and then is more than enough. Oh well, one of the things you can do at home very well is planning your next trip… 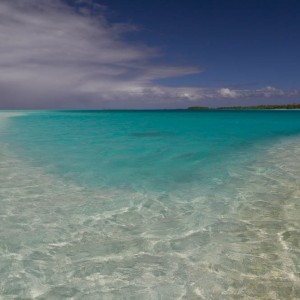 In Fakarava we met a few yachties again, and the idea to tour the world in our own sailboat is getting more and more attractive. I have decided that a catamaran is the best option, provided the hulls are wide enough to accommodate a double bed. Erwin just needs to learn how to catch tuna and how to do motor maintenance, and I have to learn how to clean tuna and how to sail. And we need to figure out how much a satellite internet connection with worldwide coverage costs. And of course how we can make some money while sailing. I am afraid that our latest business ideas, selling shark merchandise on Fakarava (Unavailable! Unbelievable.) and pop-up coffee shops during the high season probably won’t be enough. Suggestions, anyone?