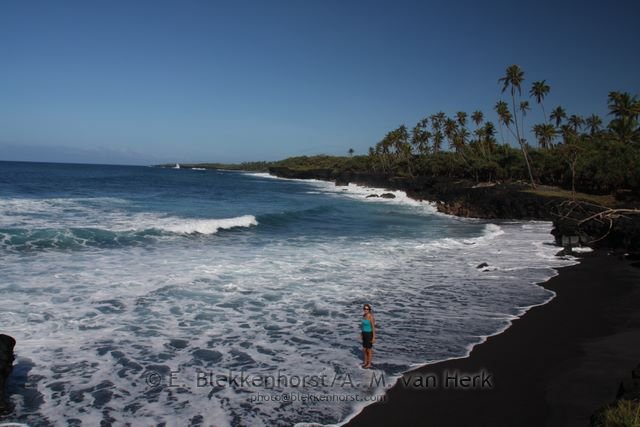 After a week on Upolu we took the ferry to Savaii, the other large island in Samoa – after Hawaii and New Zealand, the largest island in Polynesia, even. Not that that means a lot, because you can still circle it in three hours, even respecting the local speed limit of 56 km/hour. (The word “Savai’i”, by the way, is the Samoan version of “Havaiki”, which has the same meaning in many Polynesian languages: homeland, or the realm where spirits go after they die. Hawaii has the same origin.) Savaii is just as green as Upolu, the gardens are equally well taken care of, and the churches are as numerous. In the (tiny) supermarkets drinking water of the “Heavenly Water” brand is sold, and we’re not sure whether they just mean very good water, rain water or holy water. The latter would not surprise us at all. (read more)

The ferry was old and battered, but we saw a few humpback whales on our ride over, a nice bonus. Our hotel has a lovely swimming pool – being built right now so unaccessible, unfortunately. But the sea is only a few steps away and the water is great, especially when it’s sunny it’s a lovely shade of light green. And it’s a little bit warmer than in Fiji. When I went swimming the other day, I saw a little girl fishing for crabs on the rocks. Très cute, until I returned and found out that the girl had gone, and so had my thongs (flipflops)! The little bitch! That was the second time my thongs were stolen on this trip! But Samoa is not India: we told the people at the hotel what had happened, hoping that they might know the little girl. They did not, but that evening during dinner one of them walked up with my thongs in his hand: someone had left them on the side of the road in front of the hotel… so all’s well that ends well.

With our Hyundai Getz, clearly the most popular rental car on the island, there were 6 of them parked next to each other in front of the hotel, we toured the island. The roads are fine, and there is very little traffic. Only the buses are numerous, and noisy, with blaring Samoan pop music. Apart from their destination they feature fun, somewhat cryptic remarks on their front and back windows: “you wish”, “do not disturb”, “trust me”, “heartbreaker”, “Oh! lay low” and “prison break”. Apart from that last one, they’re a lot like riding fortune cookies…

Savaii has a couple of volcanoes, the last serious eruption of which took place 100 years ago. Everywhere on the island you find walls built from the lava stones, and in the northeast there’s a huge lava field, and the remains of a church through which the lava flowed up to 2 meters high. It’s fascinating to see similar waves in the hard rock that you would find in a bowl of cake dough or chocolate pudding, especially since we’ve seen the waves being created live on Hawaii!

Other attractions on the island are a lava tunnel with bats (a short one, only 60 meters), a few waterfalls and “the best blowhole in the world”. Of course we don’t take signs like that seriously, but we have to admit, this was a pretty cool blowhole. Even at low tide the water would blow at least 20 meters high, in several places. Building on that fun was a guy who for a few tala would throw a coconut into the blowhole just before a large wave, resulting in the coconut being blown up tens of meters into the air. Now that’s entertainment!