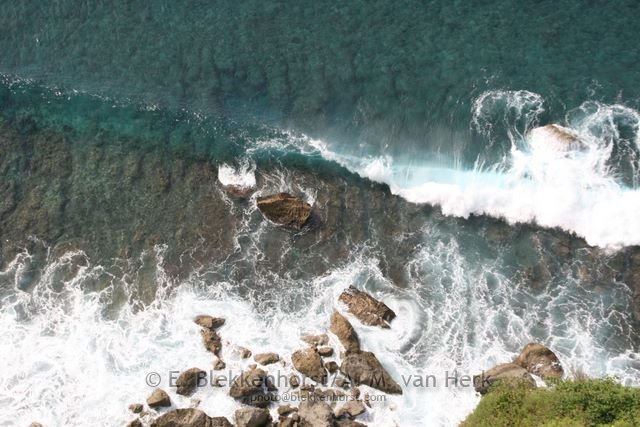 When we traveled from Yap to Denpasar, Indonesia, we had a lay over of 12 hours in Guam, USA. We didn’t feel like spending that much time in an airport so we decided it would be best to use that time to see some of the tropical albeit very American island of Guam. It was a very long day for us; we had to leave our hotel in Yap at 3 am, the plane leaving at 5 am. Pffff… Not my idea of fun. But even an extended holiday like this can be hard at times.. Luckily we could check our bagage straight through to Denpasar, so we didn’t have to carry all that around all day. After we arrived in Guam we picked up our rental car and basically did a full tour around the island; roughly 100 miles. Of course we didn’t get to see much of the US military bases there (Guam Navy Base and Anderson Air Force Base), it’s all very secret.

But the rest of the island was.. well.. very much like any other tropical island.. It has few nice beaches but quite a bit of jungle. The jungle is where, as we learned while eating a hamburger in a road side diner called Jeff’s Pirates Cove, so called stragglers where found; Japanese soldiers who never knew WWII had ended and kept hiding in the jungle, sometimes for decades, until finally being discovered. One of them, called Yokoi, was found after 28 years of hiding.. Funnily enough, most tourists that come to Guam are.. Japanese. That in itself explains why the only thing you could buy in some of the fancier shopping malls was all the high end brand (Gucci, Chanel etc.) .. erm.. handbags.. All in all a bit of a disappointment but it certainly was a lot better than hanging around an American airport.