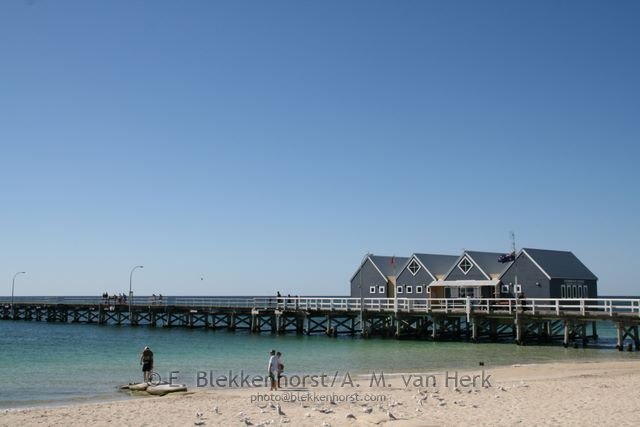 Even though the Virgin Blue morning flight from Hobart to Melbourne was one hour late, due to “engineering reasons”, we were still in time for the connecting flight to Perth, Western Australia. We were excited to go there. Not only because we wanted to see what this booming city on the West coast is all about but also because we would be meeting Miek’s parents there. The first familiar faces to see in about 80 days… Somehow it’s always a bit strange, but fun, to see friends or family abroad, especially now that it’s “down under”. And so it was this time as well..

We will be traveling through South Western Australia together which should be a lot of fun. We started off by touring Perth itself, visiting the fantastic Aquarium, some of its splendid beaches and the famous and lovely town of Fremantle. Today we drove south along the West coast towards the Margaret River Wine Region. We’re having a very big car for the four of us (a luxurious Toyota Aurion) but somehow some of us had doubts about its size (the biggest car Hertz could give us) and our ability to make the luggage fit in the trunk. It only took a little violence and a little bloodshed but we managed to squeeze it all in.. 🙂 Along the way we stopped at Busselton to see and walk the largest (yes, here we go again) jetty in the Southern hemisphere. It’s 1841 meters in length so it’s perfect for a late afternoon walk under a perfectly blue sky.